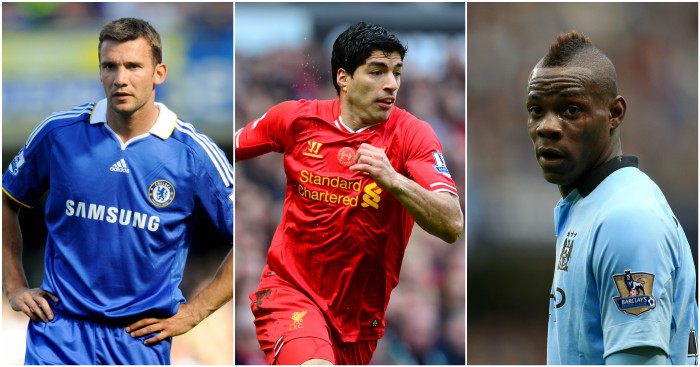 The FIFA rankings might be a largely piping hot mess, but they’re actually useful here. Who are the most expensive Premier League signings from the top 30 nations on this fine earth?

1) Germany – Mesut Ozil (Arsenal) – £42.5m
Everyone’s favourite fraud might have his fee overtaken by Leroy Sane should all Sane’s add-ons come to fruition, but for now he takes the crown as the most expensive player for the world’s best team.

2) Brazil – Ederson (Manchester City) – £34.7m
For all the evidence you need of how mental the Premier League’s transfer market has become, Ederson is the most expensive Brazilian ever recruited to England and yet he hasn’t even been capped by his country.

3) Argentina – Angel Di Maria (Manchester United) – £59.7m
We so wanted it to turn out beautifully, but alas. Di Maria never really fancied England anyway, and got his desired move to Paris St Germain as a result. He’s having much more fun in France.

4) Portugal – Bernardo Silva (Manchester City) – £43m
The supposed heir to the Manchester City Silva dynasty, Portuguese Bernardo will have to go some to eclipse Spanish David.

5) Switzerland – Granit Xhaka (Arsenal) – £33.8m
With over a £20m gap to Xherdan Shaqiri in second place, Xhaka strolls this one. He’s the high hope of the (supposedly) fifth best nation in the world and the high hope of Arsenal’s central midfield. Time to get back into the Champions League.

6) Poland – Kamil Grosicki (Hull City) – £7m
Almost as ridiculous as Poland being ranked sixth in the world despite never having got beyond a quarter-final since 1982 is Kamil Grosicki being their most expensive Premier League import. He might well break his own record this summer.

7) Chile – Alexis Sanchez (Arsenal) – £35m
You might have heard his name mentioned once or twice this summer, as Arsenal work out how much they can sell Sanchez to Manchester City for to make everyone forget that they said they wouldn’t sell him to Manchester City.

8) Colombia – Juan Cuadrado (Chelsea) – £23.3m
He came, he saw, he smiled regularly but never made the grade. Chelsea managing to get 337 league minutes out of a £23.3m signing would have been disastrous had they not managed to sell him for £17m. Which they obviously did.

10) Belgium – Kevin de Bruyne (Manchester City) – £55m
Oh sh*t, this feature is going to be out of date in about ten minutes…

11) Spain – Fernando Torres (Chelsea) – £50m
Oh Nando. You were so utterly brilliant at Liverpool but miserably awful at Chelsea, provoking Chelsea fans into trying to justify the fee by the impact of the one goal against Barcelona and provoking the rest of us to wonder whether he was ‘back’ every time he actually scored.

12) Italy – Mario Balotelli (Manchester City) – £24m
It is one of the outliers of the last three decades that while Italy have gained notable success in major tournaments (around dire failure, it must be said), Italian footballers have rarely moved for mega money. Gianluigi Buffon is still the most expensive Italian, while Balotelli is their most expensive Premier League export. By a distance.

13) England – Raheem Sterling (Manchester City) – £49m
Raheem ‘The Dream’ Sterling or Raheem ‘The Scapegoat’ Sterling, depending on which publication you read. Only three City players started more league games last season than Sterling, despite huge competition for places. The arrival of Silva (and Sanchez?) only makes things tougher.

15) Croatia – Dejan Lovren (Liverpool) – £20m
We all remember Croatia as that gorgeous team from Euro ’96 and France ’98, but the truth is that they peaked just before transfer fees started to get silly. And so you have Lovren costing four times more than Davor Suker.

16) Mexico – Javier Hernandez (Manchester United) – £6.5m
As time erodes away at fringe memories, reducing entire seasons to a few moments, there are certain goals, saves and incidents that become pillars of our minds. For me, Hernandez’s back header for Manchester United against Stoke is one of those pillars. Sensational.

17) Uruguay – Luis Suarez (Liverpool) – £22.7m
You have no idea how much I wanted to write out £40,000,001 as the transfer fee above. Truly a low moment in Arsenal’s shambolic leadership of the past five years. Silly smoking b*stards.

18) Sweden – Victor Lindelof (Manchester United) – £30.8m
During the 1990s and early 2000s, Swedish (and Scandinavian in general) players were used as the budget, clever option for Premier League clubs. They were reliable, they were used to the weather and they had grown up watching English football. Now we’re paying £30.8m for a 22-year-old cenrtral defender. It turns out the game has changed – more as we get it.

19) Iceland – Gylfi Sigurdsson (Tottenham) – £8.8m
Almost forgot about my Gylfi pleasure here, but that £8.8m fee will be almost sextupled should Everton get their way. Doesn’t that leave Swansea City in several types of bad trouble?

20) Wales – Joe Allen (Liverpool) – £15m
Gareth Bale might have left for a stonking great fee, but next comes a Welsh sandwich with Allen as the bread and Ashley Williams as the filling. Allen moved to Stoke City for £12m last summer, but joined Liverpool from Swansea for £15m to pip Bale.

22) Northern Ireland – Jonny Evans (West Brom) – £6m
One of Chelsea’s greatest achievements over the last decade is getting good money for their fringe players, and nothing sums up the inability of their rivals to match that attribute than Manchester United letting Jonny Evans leave for £6m. Even at 29, he’s now worth at least three – and probably four – times that price in the current market.

23) Iran – Ashkan Dejagah (Fulham) – £2.2m
I don’t want to have a pop at Dejagah, but let’s be transparent for a moment. There are three Iranians to have played in the Premier League: Dejagah, Karim Bagheri and Andranik Teymourian. One of the other two moved for a nominal fee and the other cost £400,000. Ashkan, you’re in virtually by default.

24) Egypt – Mohamed Salah (Liverpool) – £34.3m
Salah is unique on this list in that he takes up positions one and two in the most expensive Premier League Egyptians. Take that, Mohamed Elneny, Amr Zaki, Hossam Ghaly, Mido and Gedo.

25) Ukraine – Andriy Shevchenko (Chelsea) – £30.8m
The signing that ultimately caused the biggest rift between Jose Mourinho and Roman Abramovich, and another reminder to football club owners that managers are appointed because they have more expertise and experience.

26) Costa Rica – Bryan Ruiz (Fulham) – £10m
It’s definitely weird that Fulham account for more signings on this list than everyone but Manchester United, Manchester City, Liverpool, Chelsea and Arsenal, but not as weird as spending £10m on Bryan Ruiz.

29) Ireland – Damien Duff (Chelsea) – £17m
It’s time to reveal my long-held belief that Duff is the most underrated player in Premier League history, so queue up to tell me why he was crap.

30) Bosnia  – Edin Dzeko (Manchester City) – £27m
Another one who didn’t face much competition. If you add up the transfer fees of all the other Bosnians to play in the Premier League, you get exactly the same fee as the one Manchester City paid for Dzeko. Isn’t that cute?