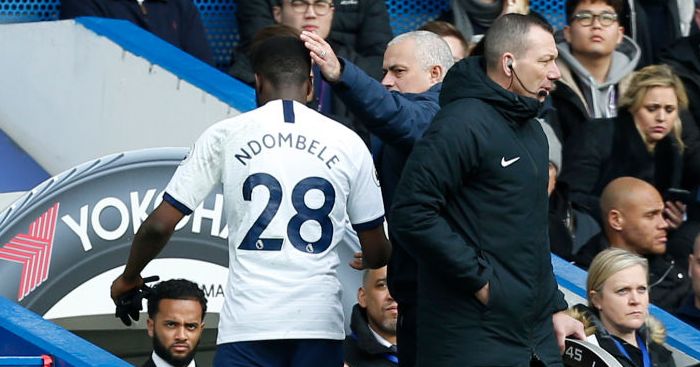 Who is the most subbed player for each Premier League club? Maybe Mourinho has a point on Ndombele…

Mesut Ozil (18 starts, subbed off 11 times)
The symbol of spinelessness has come to represent Arsenal’s rather quiet and understated improvement. Once the lightning rod for pundit opprobrium, Mesut Ozil has proved useful to Mikel Arteta’s approach. Yet the German has completed 90 minutes twice in ten starts under the new manager, having done so five times in eight appearances for Unai Emery this season. Less has most certainly been more.

Anwar El Ghazi (21 starts, subbed off 12 times)
He has been substituted for Trezeguet, Henri Lansbury, Jota, Douglas Luiz and Keinan Davis, twice in 3-2 defeats, once in a 5-1 win and 2-2 draw, and in the first half, a couple of minutes before the hour mark and in second-half stoppage-time. There are three certainties in Aston Villa life: dreadful defending, Jack Grealish clutching his leg after a 427th foul and Anwar El Ghazi being any variation of taken, hauled or even applauded off.

Harry Wilson (19 starts, subbed off 17 times)
Remember when Liverpool dropped a ‘clanger’ by not recalling Harry Wilson from his loan at Derby last season? At least the Rams let him finish a game every now and then; Eddie Howe has rarely afforded that courtesy to the Welshman. He started and finished the 2-1 win over Aston Villa last month and the 1-0 defeat at Crystal Palace in December, but no game before or since. The second most substituted Bournemouth player this season is Josh King, who has seen his number flashed up on the sidelines a full ten times fewer than Wilson. Perhaps they should keep him on and just play for free-kicks?

Pascal Gross (18 starts, subbed off 10 times)
No other Premier League player has a Wikipedia page dedicated to their removals from or introductions to matches. Graham Potter has used all but two of the substitutions available to him this season, even making three half-time changes in one game, and has spread them relatively equally throughout his squad. Pascal Gross pips Aaron Connolly and Martin Montoya (both subbed off 9 times) to this particular post.

Ashley Barnes (17 starts, subbed off 12 times)
He might not have started for Burnley since New Year’s Day, when he was obviously brought off at half-time in defeat to Aston Villa, but Ashley Barnes is still holding off the challenge from Chris Wood, who himself has been taken off ten times this season. Sean Dyche clearly checks his lumps regularly. Good man.

Tammy Abraham (23 starts, subbed off 15 times)
Frank Lampard was careful not to break his favourite new toy even when he was having the most fun with it. Tammy Abraham scored ten goals in Chelsea’s first 13 games of the Premier League season, but only completed 90 minutes once. Then Lampard started testing Abraham’s resolve instead of trying out world champion Olivier Giroud. He has scored three times in the subsequent 16 matches, his body creaking and cracking under the pressure of leading the line for entire fixtures against Everton, Bournemouth, Southampton, Arsenal (twice), Brighton and Burnley. His current injury came after he started seven straight league games from Boxing Day to February 1 and was substituted just twice – in the 80th and 83rd minutes.

Cheikhou Kouyate (23 starts, subbed off 12 times)
As a general rule, a midfielder probably shouldn’t need to be substituted in more than half his league appearances. But Champions League-chasing Crystal Palace stopped making sense long ago, so Roy Hodgson will continue taking Cheikhou Kouyate off, be it for the defensive Jairo Riedewald, the offensive Max Meyer or the vaguely similar James McCarthy, as he sees fit.

Theo Walcott (14 starts, subbed off 13 times)
Considering Theo Walcott scored a last-gasp winner against Watford in the only game he has started and finished this season, it is a mystery why none of Carlo Ancelotti, Duncan Ferguson or Marco Silva have given a full 90 minutes more often. Mind you, the 30-year-old is the most substituted player in Premier League history for a reason. And that reason is that he has been substituted in loads of Premier League games.

(Giggs had held the record since Dec 2013) pic.twitter.com/GXWZWdKWH2

Ayoze Perez (21 starts, subbed off 18 times)
There is still a chance that Steed Malbranque’s record for most substitutions in a single Premier League season (26 in 2009/10) will be broken this campaign. Ayoze Perez just needs to be taken off in each of Leicester’s last nine games. Don’t f**k this up, Brendan.

David Silva (16 starts, subbed off 10 times)
Kevin De Bruyne has been taken off as often, but the Belgian has started nine more Premier League games than last decade’s greatest player. David Silva’s reduced role is such that Walcott has overtaken him for that aforementioned record, with three full 90-minute displays in the FA Cup matching what he has managed in the league since November.

Andreas Pereira (18 starts, subbed off 13 times)
The good news for Andreas Pereira is that he won’t suffer the ignominy of being substituted many more times for Manchester United. The bad news is that is only because he is unlikely to play much more often for them at all. If he manages to make it to the end of that four-year contract he was unfathomably given in July, send all of the hats to the Football365 office for mass consumption.

Solskjaer making a rare HT sub: Greenwood on for Pereira, who has been poor. Greenwood is special, but it's a pretty desperate situation that United are relying on an 18-year-old for some magic at home to Burnley #MUNBUR

Joelinton (started 27 times, subbed off 16 times)
Newcastle’s aggregate score in the 11 Premier League games Joelinton has completed a full 90 minutes in this season is 4-18. Their only victory, the exception to a rule of infuriating mediocrity, was the last-gasp win over Chelsea in January. Their £40m striker completed more tackles (3) than he had shots (2) or created chances (0) in that game. But he did win 14 f**king headers.

Todd Cantwell (25 starts, subbed off 16 times)
Norwich have at least taken measures to ensure that Todd Cantwell is in some way acclimatised to Premier League benches ahead of his £30m move to Liverpool in the summer. But the 22-year-old can only watch and admire the unerring brilliance of teammate Marco Stiepermann, who has been substituted in each of his 11 league starts so far.

David McGoldrick (16 starts, subbed off 13 times)
Chris Wilder has given him ample opportunities to score an actual Premier League goal, but David McGoldrick seems intent on not repaying that faith. The 32-year-old has started just twice this calendar year as Billy Sharp has been promoted to the role of Oli McBurnie’s minder. McGoldrick’s hat-trick on the final day to secure Champions League qualification sure will be fun.

Danny Ings (23 starts, subbed off 14 times)
With his solitary England cap coming as a substitute in 2015, Danny Ings is unlikely to resent his role as Southampton’s sacrificial lamb. Some players are taken off regularly because they become ineffective later in games, while others simply don’t have the stamina; Ings is being wrapped in cotton wool, and for good reason.

68' Double @SouthamptonFC sub; Obafemi and Adams on, Long and Ings off.

Gerard Deulofeu (25 starts, subbed off 14 times)
Watford must make do without their catalyst as they battle to avoid Premier League relegation. Gerard Deulofeu’s knee injury came after he helped lay those impressive foundations against Liverpool at Vicarage Road, with replacement Roberto Pereyra helping build towards a memorable win. Deulofeu was Watord’s most substituted player last season, too, so won’t mind.

Felipe Anderson (19 starts, subbed off 13 times)
When you realise West Ham have not won a Premier League game in which Felipe Anderson completed a full 90 minutes since the final day of last season, it becomes a little easier to understand Manuel Pellegrini and David Moyes’s collective stances.

Diogo Jota (21 starts, subbed off 16 times)
It is actually a similar story for Diogo Jota, who has not started and finished a Premier League win since the penultimate game of last season. It’s a good job neither he nor Wolves have a discernible glass ceiling.

Do not agree with that Jota sub at all, main threat going forwards..