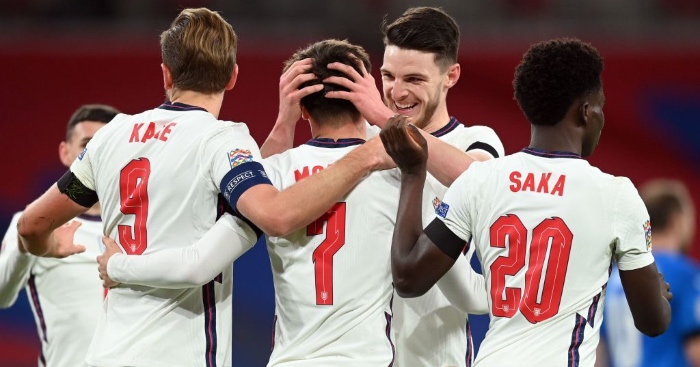 They started in the middle of the park together as England eased to comfortable 4-0 win over Iceland in the Nations League on Wednesday evening.

Both got on the scoresheet at Wembley, with Rice’s header the first goal of his international career.

Marina Granovskaia’s transfer priority for Chelsea is to sign a defensive midfielder, with Frank Lampard thought to be keen on Rice in that position.

🤝❤️ | From being best friends at eight-years-old to starting together for England and getting on the scoresheet!

This post-match interview from Mason Mount and Declan Rice is some really wholesome content…🦁🦁🦁 pic.twitter.com/ZmrcZVjlH3

That would allow best buds Mount and Rice the opportunity to play together for club as well as country – something the pair would relish.

And Mount believes playing alongside Rice brings the best out of his game.

“Being in there with him, letting him do the defensive side, winning the ball back,” Mount told Sky Sports.

“I kind of had the freedom to go a bit forward, link up with Jack [Grealish] Phil [Foden] and H [Harry Kane] up front and that’s the freedom I had.

“So just trying to link everything up, obviously score goals, get assists.

“The attack we had tonight was deadly in scoring goals. It was a good performance and hopefully we can get better and better.”