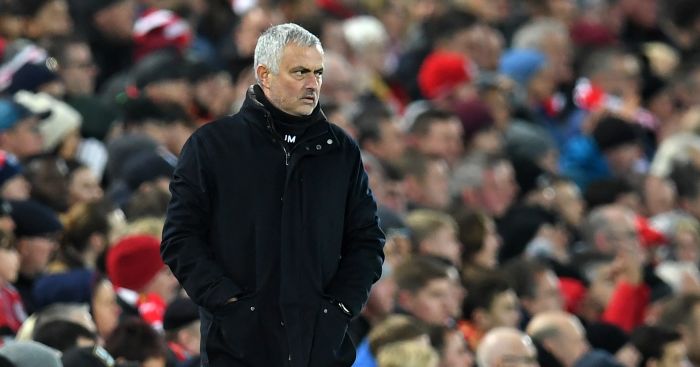 Liverpool moved 19 points clear of their rivals with a 3-1 win at Anfield on Sunday afternoon.

The home side took the lead through Sadio Mane in the first half, but United answered back as Jesse Lingard capitalised on an error from Alisson.

However, Jurgen Klopp’s side were not to be denied three deserved points, as Xherdan Shaqiri netted twice in the second half to help fire the Reds to a 3-1 win.

“They are the strong team, but it’s hard to concede two goals in the moment we conceded and the way the goals happened,” Mourinho told Sky Sports.

“Our difficult moment was the first 20 minutes. We couldn’t cope with their fantastic intensity and pressing, but then we were quite calm and it was controlled.

“They became really frustrated when their centre-backs came forwards and fired shots into the stands – that was the period when it was more in control.

“There were two easy goals for Shaqiri and because of the deflections there was no chance.

Shreeves then asked Mourinho what he could do to help fix United’s current issues and stop the rot.

“What do you mean by fix? Win the title? Of course not,” the Portuguese replied.

“We can still finish fourth. It’s not easy. For sure we are going to finish in the top six. Best we can get is fourth. Now we look to the fifth and then later the fourth.”

Shreeves then asked: “Are the players playing for you?”

“The players on the pitch gave everything. We can’t compare the intensity and physicality of Liverpool. In spite of that were were in the game until we conceded the third goal.”