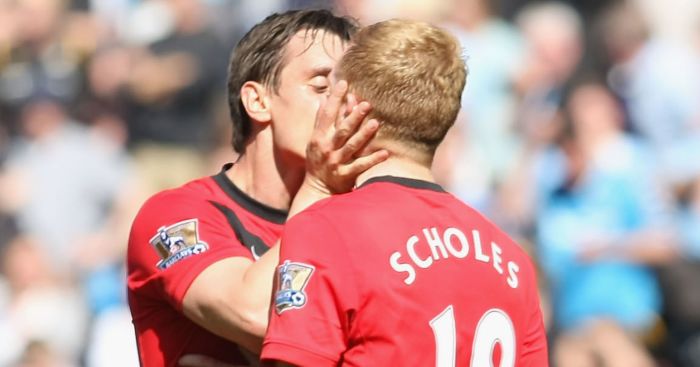 Jose Mourinho appeared to aim a dig at Manchester United legends Gary Neville and Paul Scholes over their short stints in management.

Neville lasted 16 La Liga matches in charge of Spanish side Valencia before they sacked him, while Scholes decided to quit Oldham after only 31 days in the job.

The two former players were critical of Mourinho during his time as boss of United in their role as pundits and now the Portuguese boss has taken a swipe.

“We have in England former top players, amazing in front of the screen, they go to football clubs and after two months, goodbye, let’s go home because it isn’t right for us,” Mourinho told RT.

“So there are things, you have it, or you don’t have it.”

'We have in England former top players, amazing in front of the screen, they go to football clubs, and after two months, goodbye, let’s go home because [management] isn't right for us'

Who could Jose Mourinho mean? 🤔

Mourinho added on RT’s Champions League analysis show ‘On the Touchline with Jose Mourinho’: “There is one part of it [management] that people sometimes forget, even some top pundits, they forget it, which is you have to be born with some talent adapted.

“It’s a little bit the same thing as what football academies can make with players.

“I think it’s a natural knowledge and understanding of the game.

“It’s another thing that technology, experience at other levels can’t replicate, which is the knowledge of the pressure you are under.

“One thing is us, in front of a screen analyzing a game live, and saying, ‘now I would take this one, and I would put that one.’

“That decision, when you are on the touchline, can you on the touchline have the same state of mind to be calm, to be an analyst, to read the game, to be brave enough to take the pressure?

“I used to say this, everybody in the world knows more about football than us.

“It’s the only job where the people know more than the specialists, and thank god it’s like that, because that’s why football is what it is.”