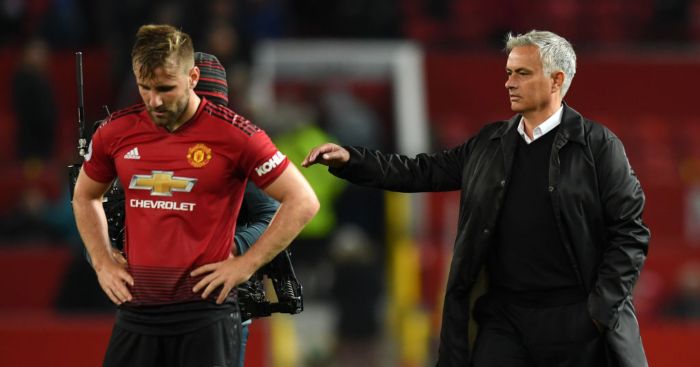 Jose Mourinho has aimed a dig at Luke Shaw when analysing Manchester United’s performance in their 4-0 victory over Chelsea on Sunday.

The Portuguese coach was often critical of Shaw during his time at the Red Devils before his sacking in December.

Mourinho even gave himself credit for one of Shaw’s better performances against Everton in April 2017, he said: “He had a good performance but it was his body with my brain. He was in front of me and I was making every decision for him.”

Working as a pundit for Sky Sports on Sunday as United beat Chelsea, he pointed out a situation where Harry Maguire had to cover for Shaw and he insisted that will happen “a lot of times” this season.

“When a player is attracted to the inside and then Maguire is the one who has to jump on the outside, the United midfielders are not closing the space in the box,” Mourinho said on Sky Sports.

“When Maguire is attracted to cover Luke Shaw, and he has to learn that he has to do this a lot of times, during the season he will learn he needs to do that.

“When he’s [Maguire] attracted to that cover, the space in the face of the goal someone has to arrive. In this situation it didn’t arrive, and I believe by the nature of the players they [Chelsea] will not arrive many times too.”