Home Arsenal Mourinho and six other bosses who cried conspiracy 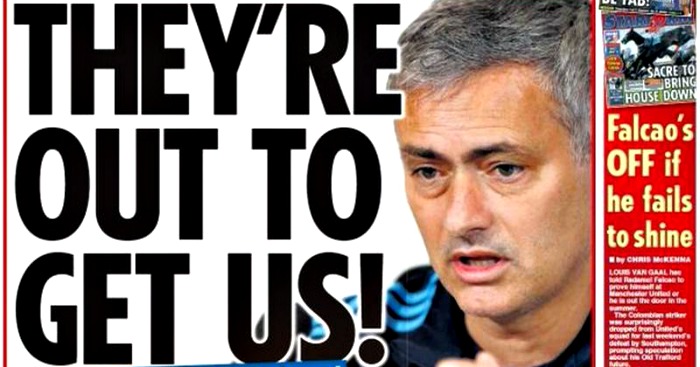 Jose Mourinho claimed that there was a conspiracy against himself and Manchester United in midweek. Said conspiracy is the only reason they are sixth in the Premier League table, you see. But which other managers believe they have been victims of similar ill-treatment?

Jose Mourinho
The Portuguese, of course, is no stranger to donning his tin-foil hat and mumbling incoherently about how ‘the man’ is out to get him. During Chelsea’s most recent Premier League title-winning season, he famously took to Sky Sports to question their recent criticisms of Diego Costa, who had been busy innocently elbowing and stamping on people.

“The media, commentators, other managers are all doing it,” he said in January 2015, with regards to people putting pressure on referees. “There is a campaign against Chelsea. I don’t know why there is this campaign and I do not care.”

He was charged with misconduct by the FA and fined £25,000. It did little to lighten his mood, and he would follow with yet more claims in April of that year, having led Chelsea to a 1-0 victory over Manchester United on their march to the title.

During that game, midfielder Ander Herrera was booked for diving in an attempt to win a penalty. Mourinho was not impressed.

Then came the flourish: “But because he’s a Man United player, tomorrow nobody remembers.” Beautiful.

To choose one Ferguson conspiracy is to unfairly disregard all the others, for there were many. He claimed in May 2011 that Manchester United “never seem to get these kind of decisions”, with Michael Owen having been refused a penalty after being seemingly fouled by Gael Clichy during a 1-0 defeat to Arsenal in May 2011.

That slip handed leaders Chelsea a boost in their title pursuit. They beat Tottenham 2-1 the previous day. “They got great decisions yesterday,” Ferguson would say. “They got one to win the league at Old Trafford last season, so that’s a worry. We go into these kind of games worrying about these kind of things.”

Poor thing. The Scot would also use his platform to question the fixture list on a number of occasions, including in January 2009: “I think we have been handicapped by the Premier League in the fixture list. They tell me it’s not planned. I’ve got my doubts.” Which leads us nicely into…

David Moyes
The man who inherited Ferguson’s managerial seat at Old Trafford also had bestowed upon him the victim mentality – although Moyes could never truly carry it off as well as his predecessor.

It took only a few months for his first conspiracy to come to light. “I find it hard to believe that’s the way the balls came out of the bag, that’s for sure,” he said in August 2013, complaining about the fixture list, believing that the Premier League schedule a 10-month tournament in the same way an FA Cup draw is made.

Moyes: "We are having to play the opposition & the officials at this moment..maybe I've got to understand that's what happens at Man United"

“I hope it’s not because Manchester United won the league quite comfortably last year [that] the fixtures have been made much more difficult,” he would add, before going on to state that it was “the hardest start for 20 years that Manchester United have had”. And thus the bar was set as low as possible. Despite that, he still underwhelmed like only David Moyes can.

Brendan Rodgers
Former Liverpool manager Brendan Rodgers chose a rather strange time to shed some light on a conspiracy surrounding his position as manager. It was September 2015, the Reds had started the season rather inauspiciously after finishing second the previous campaign, and they had just beaten Aston Villa.

“I am pretty confident that there is a group of people that don’t want me here to be the manager,” he would say in his post-match interview. “In all competitions, we’ve lost less games than Manchester City, Chelsea and Arsenal. Lost two games which is equivalent to Tottenham, Manchester United and ourselves have lost two. But obviously the hysteria around ourselves is obviously interesting to note.”

He would be fired a week later.

Arsene Wenger
The Arsenal manager has been in the Premier League for over two decades, so it is little wonder that he has grown weary over time. Back in February 2008, a matter of days after that draw with Birmingham and that leg break for striker Eduardo, who embarked on what The Metro could only ever describe as an ‘astonishing rant’.

“How many times did I sit in a press conference and hear ‘Oh, they got in your face today and you did not find an answer’? We try to play football. The guys you should ask this question to is not me, it is the opposition manager. Every four fouls, Arsenal gets a yellow card and some other teams get yellow cards every nine fouls.”

The Frenchman also once directed his ire at television companies. In January 2012, he claimed that “some clubs get advantaged by television, if it’s Sky or ESPN, because they have an influence there from the clubs directly”. No-one is safe.

Edgar Davids
And you thought conspiracy theories were restricted only to managers of the best Premier League clubs? Edgar Davids laughs in your face, pal.

It was March 2013, and the novelty of Davids’ managerial reign at League Two Barnet had not yet worn off. The club were battling relegation, and the legendary Dutchman was busy pointing fingers elsewhere.

Davids, who had been sent off two weeks prior in a defeat to Accrington Stanley, had witnessed his side have two more players sent off in a draw with Dagenham & Redbridge. He took to The Sun to air his views.

“The referees lately are not fair to Barnet. Do they want us to fail? We have a difficult game ahead at Wimbledon but you never know how the referee is going to do the match. I don’t know what instructions he’ll get from the FA. Enough is enough. I don’t like this that they are focused on Barnet. We already have a tough period ahead but we can’t have this influencing our team as well.”

Barnet would finish 23rd in League Two; Davids has not managed since.