Home All The News Mourinho apologises to Schweini; ‘regrets’ his actions 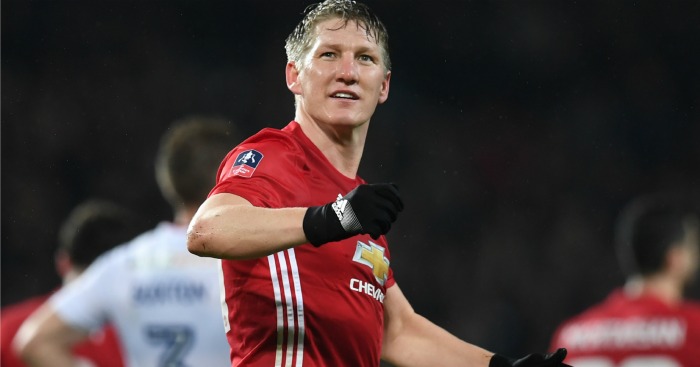 Manchester United manager Jose Mourinho regrets the way he treated Bastian Schweinsteiger and apologised to the midfielder before his switch to the Chicago Fire.

What had long felt an inevitable exit was confirmed last week, with the 32-year-old swapping Old Trafford for Major League Soccer.

Schweinsteiger largely flattered to deceive at United after arriving in 2015, but the World Cup winner had precious little chance to turn things around once frozen out by Mourinho the following summer.

The former Germany midfielder dropped so far down the pecking order that the club even wrote him off as an asset in their accounts, only for him to make a surprise return from the cold.

Schweinsteiger made four appearances after being brought back into the first team in late October, but was last week granted a move to the United States – a deal Mourinho could not stand in the way of having accepted he mistreated the midfielder.

“He’s in the category of players that I feel sorry for something that I did to him,” Mourinho said.

“So when he was asking me to let him leave I had to say ‘yes, you can leave’ because I did it once, I cannot do it twice.

“So I feel sorry for the first period with him, he knows that. I am happy that he knows because I told him.

“I could not stop him to go even knowing that until the end of the season we have so many matches and we would probably need him for a few matches or a few periods.

“I had to let him go and now publicly wish him and his wife a very happy life in Chicago.”

Asked if he regrets the way he treated him, Mourinho said: “Yeah, I do.”

Mourinho recently said that United signed some players before his arrival that he would never have given the go ahead to, but the manager would not be drawn on whether Schweinsteiger was one of those.

Such acquisitions meant Mourinho arrived at a club carrying a bloated squad and the Portuguese now accepts the German midfielder should not have been the fall guy.

“I would let him be in the squad,” he said. “I knew that at that moment we had too many players.

“If you remember at that time, we had many players in these doubtful situations and we still had (Morgan) Schneiderlin and (Memphis) Depay, and we had Andreas Pereira, Tyler Blackett and James Wilson.

“We had a huge squad in the beginning but after knowing him as a professional, as a person, the way he was behaving and respecting my decisions as a manager.

“Yes, I regret and no problem for me to admit it and he knows that because I told him.”