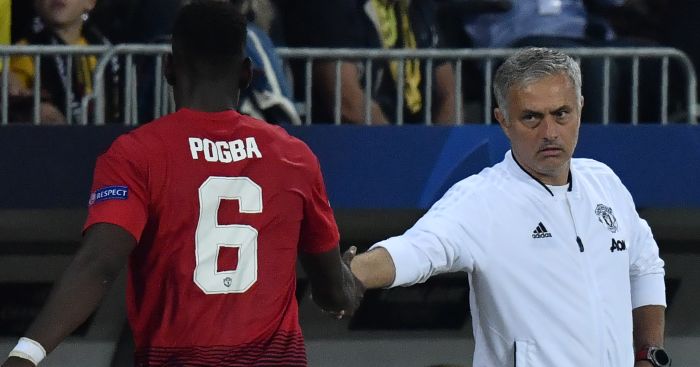 Jose Mourinho claims that Paul Pogba was not “the only one responsible” for his downfall at Manchester United.

Pogba was dropped by Mourinho for his last three Premier League games in charge at Old Trafford, before a startling return to form for the 25-year-old following Mourinho’s dismissal and Ole Gunnar Solskjaer’s appointment as interim manager.

The France international, who has been named in the PFA top-flight Team of the Year, has had another dramatic dip in form in recent weeks and his future at United is again uncertain.

In an interview with L’Equipe (via Sport Witness), Mourinho was asked whether he was a ‘victim’ of Pogba, he said: “No, no.”

When pushed, Mourinho added: “The problems are there, you can imagine that these are the players, the organisation, the ambition, I only say that I cannot say yes when you ask if Paul was the only one responsible.”

Solskjaer guided United to a 3-1 victory over Paris Saint-Germain in the Champions League last-16 to overcome a two-goal deficit from the first leg.

Asked how United were able to overcome PSG, Mourinho responded: “I do not want to explain. I think I know the reasons, but I do not always do my analysis publicly. Manchester United, I do not want to talk about it.

“And I have the feeling that I do not need to talk, that time gives explanations: no need for the former coach to talk about it.

“For United, this victory is a bit ‘out of context’, even though we won in Turin in the group stage. For Paris, I think that I know some reasons, tactical and mental.”