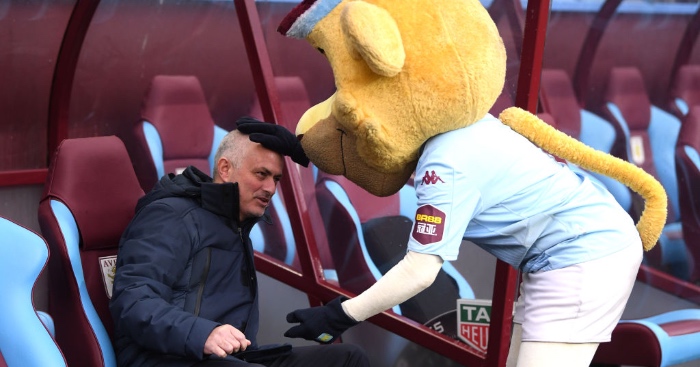 Alderweireld scored an own goal early on to give Villa a deserved lead before equalising with a fine shot on the turn.

Son Heung-min then gave Spurs the lead, converting a rebound after his tame penalty was saved by Pepe Reina, before Engels out-jumped Alderweireld to draw the hosts level.

And it looked as though an end-to-end game was petering out to a draw before Engels fluffed a simple control to allow Son to run through on goal and slot past Reina to secure a vital three points that sees Spurs move to within a point of Chelsea in fourth.

But Mourinho was eager to point out how well Villa had played, while insisting a number of teams are now vying for Champions League football, with fifth place now enough to secure qualification for Europe’s showcase competition.

He told BBC Sport: “I thought we deserved to win but I think they did not deserve to lose. Villa played to win.

“A window opens for many teams. What seemed far, now the fifth place is not far. Arsenal, Everton, Sheffield United, Wolves… everyone will feel they have the chance.”

On Alderweireld’s interesting afternoon, Mourinho added: “In a funny way I’d say he’s scored three goals: the own goal, his goal and then when he loses the duel with Engels. But he scored with a shot of his life with a new baby this week.”