Home All The News Mourinho rants after Spurs selection query: ‘Why not Lampard or Klopp?’ 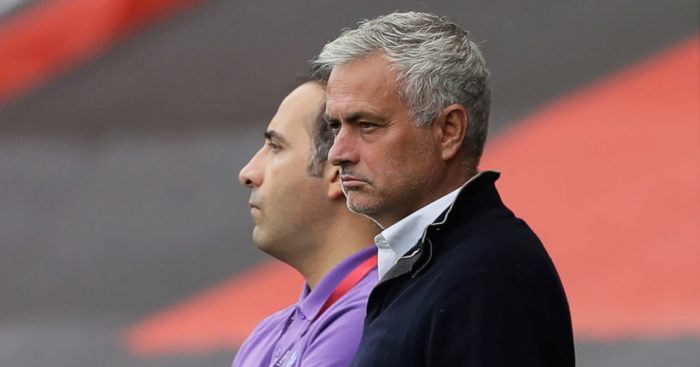 Tottenham boss Jose Mourinho was once again forced to defend his team selection and asked why managers like Frank Lampard and Jurgen Klopp aren’t questioned in a similar way.

Mourinho is frequently asked why record signing Tanguy Ndombele has been so rarely used since his arrival in July, and his rotation of his forward players is also often qeried.

Steven Bergwijn was the latest player Mourinho was asked about – having made an instant impact when he came on to assist Harry Kane’s first goal.

Mourinho said: “Look, that is a question you normally do to me but you do not do to Frank Lampard, to Jurgen Klopp, to Pep [Guardiola], to all the coaches of the big clubs with big players.

“Frank Lampard plays [Christian] Pulisic, you don’t ask him why he doesn’t start [Callum] Hudson-Odoi or something. When Pep Guardiola plays someone and Bernardo Silva is on the bench, you never ask about Bernardo Silva.

“How many times has Nuno [Espirito Santo] left [Adama] Traore on the bench to win matches in the last 30 minutes. You don’t ask Nuno why Traore is on the bench and why he’s playing [Diogo] Jota or [Daniel] Podence or [Leander] Dendoncker. It’s just me.

“So he doesn’t have to do anything else, he’s a team player. He plays for Tottenham and if Tottenham wants to try and compete against the best teams, Tottenham cannot have 11 good players, they need more and we’ll have them on the bench.”