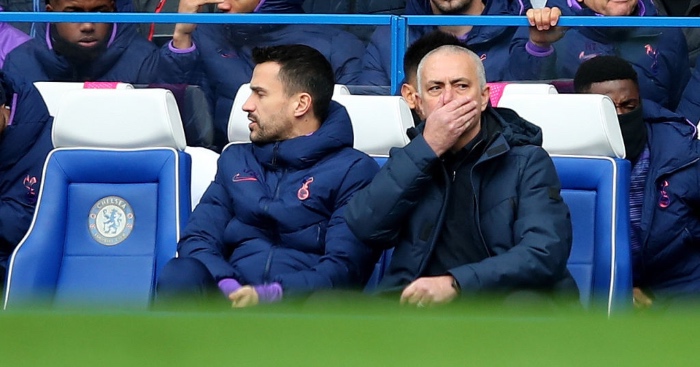 Jose Mourinho claimed Spurs were “completely in control” and that there were “no tactical problems” in their 2-1 loss to Chelsea at Stamford Bridge, and again blamed injuries for his side’s loss.

Olivier Giroud and Marcos Alonso scored the goals for the Blues on their return to the starting lineup in a crucial win in the race for Champions League qualification.

Tottenham were outplayed for the vast majority of the game at Stamford Bridge, and Chelsea has a number of opportunities to put the game out of reach of the visitors.

Antonio Rudiger’s own goal in the last minute gave Spurs a glimmer of hope, but they created very littler.

But Mourinho – as he did after their defeat to Leipzig – claims he was “very proud” of his players.

“I’m very proud of the players, they gave absolutely everything. We don’t have a striker. Our attacking players are not strikers and are in huge levels of fatigue, so very, very difficult for us. No tactical problems, [we were] completely in control of the space, punished by a couple of individual mistakes.

“To create chances you need a target man or fast people that can interchange positions, you need a different dynamic to the team. We don’t have a striker and we have tired players, it’s as simple as that. We did very, very well. If we score before our opponent, I think we have a chance because we are well organised. But when they score before us and drop back it’s very, very difficult for us.

“A defeat is a defeat, but the good thing is, in the last seconds the players were still fighting for a result and that for me is a very important thing.”