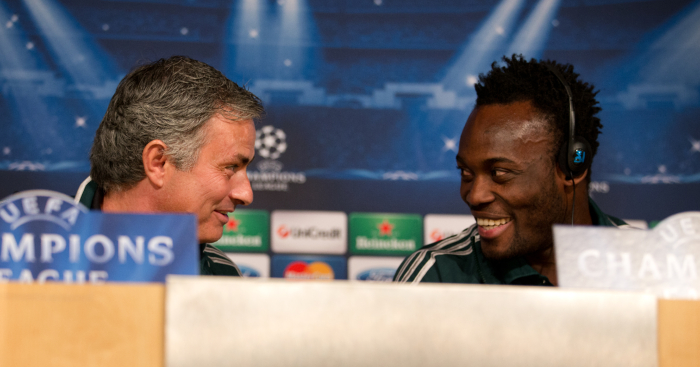 Jose Mourinho has referred to himself as the ‘white daddy’ of former Chelsea midfielder Michael Essien.

The pair were very close after Mourinho signed Essien from Lyon in 2005 and were then reunited at Real Madrid in 2012.

Essien has often spoken about the now-Manchester United manager as a father figure and now Mourinho has paid tribute to the Ghanaian.

“He was not my player, he is my son – I am his white daddy,” Mourinho told Malaysian television station Astro Arena.

“He was probably the only one who took me to his home, to the real home. To the place he was born, to the street where he played football as a kid.

“He made me fall in love with Ghana, with Accra where he lived, because then I had a better understanding of his mentality.

“It was a destroyed knee but with that personality, that desire and that mentality he suffered, always he suffered, but always with a smile. Michael smiles a lot.”

Essien was moved by Mourinho’s words, saying: “That’s kind of emotional,’ Essien said after watching the footage. It is very nice, we have a very good relationship.

“For him to say that about me is very special.”