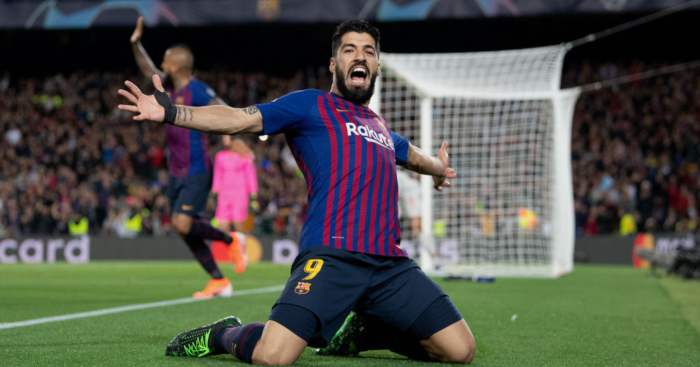 Jose Mourinho thinks Luis Suarez was right to celebrate his goal in Barcelona’s 3-0 victory over Liverpool on Wednesday night.

The Uruguayan scored the opening goal of the game before Lionel Messi added two more in the last 15 minutes to give Jurgen Klopp’s side a huge task in the second leg of their Champions League semi-final.

Suarez, who spent three years at Anfield, was ecstatic after scoring – as you might expect in the last four of the biggest club competition on the planet – sliding on his knees, pumping his fist and pointing to the stands.

However, his reaction upset a number of Liverpool fans with some thinking it showed a lack of respect to the club – but Mourinho thinks in that moment “he forgot that he played for Liverpool”.

“Luis did something which is good and I love it,” Mourinho told RT.

“Many players today in football, they play and sometimes, even playing which is an emotional moment, and is a moment we are paid for, they still care with the image and some moments where people can say, ‘oh, nice fair play’ and, ‘oh, nice, he’s playing against the team where he played for a few years and where he was loved’.

“The only thing he was focused on was that match, his job, go to the final, win the Champions League.

“He scored a goal, celebrated the goal, he was fighting people, players he probably loves, players who are probably on the phone [to him] tonight.

“Incredible, incredible attitude. Messi is phenomenal, but to have next to him that kind of player, that can – it’s not the word I want to use – do the dirty work.

“But it’s not dirty, it’s important work, and on top of that work, the goal is phenomenal.

“You can look and say Matip is attracted by the ball, Van Dijk let him make the movement and lost him, but the movement is phenomenal.

“He makes a little first movement, which is almost a disguised movement, one metre here and I bring the defender with me, at least mentally because the defender thinks I’m going in that direction, and now I’m going to attack the space in front and goodbye.”