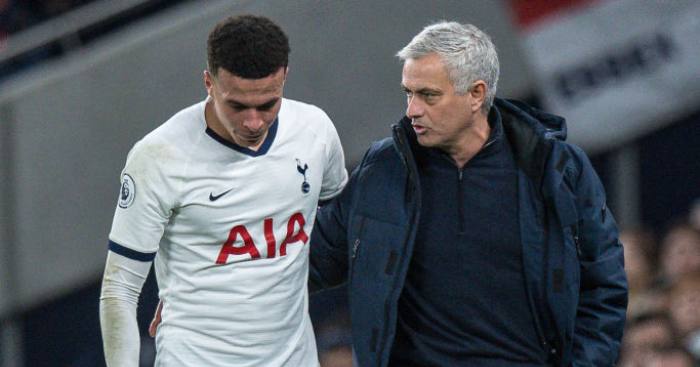 Tottenham boss Jose Mourinho claims Dele Alli is the closest he has to a number nine to play up front.

Spurs have been without Harry Kane and Son Heung-min through injury and Mourinho had been using Lucas Moura and Steven Bergwijn in the forward positions.

Alli was the man up front in the defeat to Wolves and his bigger physical presence allowed Tottenham to use him to keep the ball further up the field.

The 23-year-old was involved in Spurs’ first goal when his saved shot was followed up by Bergwijn and then he played in Serge Aurier to score the hosts’ second of the game.

“Our solutions are the solutions that you know,” said Mourinho. “We do different things according to matches and feelings. Is Dele, from all of them, the one that has more the profile of a number nine? Yes, he is probably the closest one to it.

“So sometimes Dele, sometimes Lucas and a little bit of [Troy] Parrott, step-by-step too. So there you go.”

It has been an eventful time for Alli with his FA charge for the social media video that emerged in public as well as his anger after being substituted in the Champions League defeat to Leipzig.

Mourinho said the player is absolutely fine behind the scenes, despite everything that has been going on.

“He’s fine. You don’t play lively like he did, committed like he was if you’re not in the right frame of mind,” said the Spurs boss.

“So he’s not jumping with happiness but he’s not depressed, and I’m not. He’s looking forward, he plays tonight again.

“We all know what we have. It’s the second match of a cycle of four that ends in Leipzig. We’re not going to arrive [in Leipzig] as a fresh team but we have to make sure we arrive as a team that goes there to fight for qualification.”