Home All The News Mourinho impressed with Mkhitaryan, Bailly 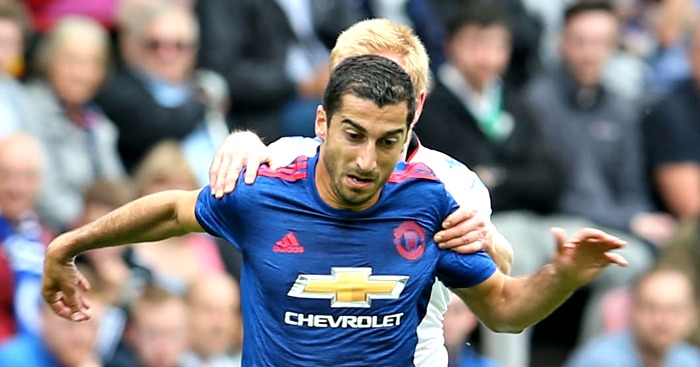 Jose Mourinho was impressed with Henrikh Mkhitaryan and Eric Bailly after seeing the two summer signings in action for the first time.

The Portuguese manager oversaw his first game as Manchester United manager in a 2-0 friendly victory over Wigan on Saturday, and was pleased with what he saw.

Mourinho gave debuts to summer signings Eric Bailly and Henrikh Mkhitaryan, who arrived at a cost north of £55million, and saw plenty to please him.

Mkhitaryan was one of seven players replaced at half-time but in his 45 minutes on the pitch the former Borussia Dortmund play-maker showed more than enough to get excited about.

He moved nimbly in the space behind the striker, passed cleverly and teed up one great chance for Memphis Depay at the far post.

It was still 0-0 by the time he departed the scene but United fans appear to have a player who can provide an injection of colour after the monochrome Van Gaal years.

“Mkhitaryan is a top-class player and currently at the best stage for a footballer – 27/28 years old,” said Mourinho.

“He is magnificent the way he thinks about football, he thinks very quickly and it’s so sweet how he touches the ball. He can play in different positions behind the striker. He doesn’t have the sharpness yet but his performance was very positive.”

Bailly was given 82 minutes at the heart of defence, partnering Daley Blind in the first half and Phil Jones in the second.

The 22-year-old Ivorian had a relatively quiet afternoon, and effectively extinguished the fire of Northern Ireland striker Will Grigg, but seems destined for a major role at Old Trafford.

“With Eric, the way the fans showed how much they liked his performance when I changed him is enough,” Mourinho added.

“Of course he is a very young boy coming from a very different environment, but you could see what he is at this moment. I will give him everything to try to make him better and better like I did with other central defenders I’ve had in my hands. He has showed the potential we saw when we decided to buy him.”