Home All The News Mourinho drawing no conclusions from Bayern defeat 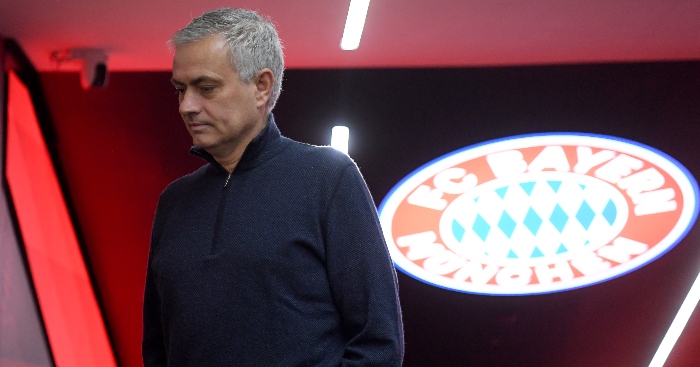 Jose Mourinho says he learned valuable information from Tottenham‘s 3-1 defeat to Bayern Munich, but is drawing no conclusions.

Spurs went into the match in Bavaria knowing that they were guaranteed to qualify in second place in the group, with the hosts having already wrapped up the top spot.

Mourinho opted to leave Harry Kane out of the travelling contingent and Son Heung-min on the bench, giving first starts to Kyle Walker-Peters, Juan Foyth, Ryan Sessegnon and Giovani Lo Celso for the dead rubber, while Christian Eriksen and Danny Rose were brought back in.

The Bundesliga champions won relatively comfortably on the night with goals from Kingsley Coman, Thomas Muller and Philippe Coutinho, but Mourinho looked to the positives, including a brilliant first Tottenham goal for 19-year-old Ryan Sessegnon.

“A good match for me. I don’t want to speak about conclusions because it is too strong a word but I would say important information,” said Mourinho, speaking to BT Sport after the game.

“I give you clearly a positive example because they are easier. Today I learned a lot about Juan Foyth. He didn’t play one minute for me until today and I learned more in these 90 minutes than I did in two or three weeks of training. No conclusions but good information.

“I would prefer to win or to draw and for Son to score in the last minute and lose 3-2 rather than 3-1 of course but we knew the match was important for other reasons. We didn’t want a result that leaves a shadow on us but I think positive things about many of the boys.”