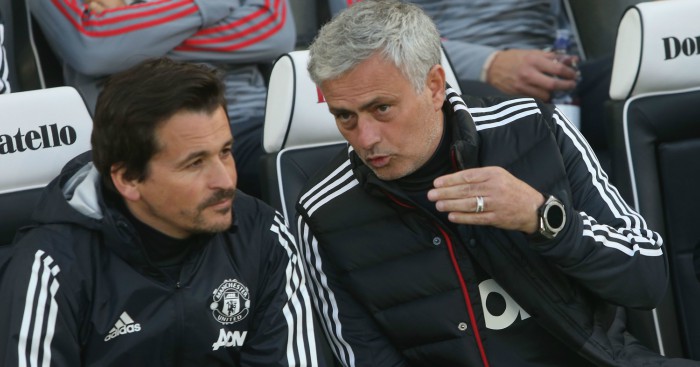 Manchester United boss Jose Mourinho hopes is his outgoing assistant Rui Faria will come up against him in opposition in future.

Faria, Mourinho’s long-serving number two, is stepping down from his role at Old Trafford at the end of the season.

Faria has worked alongside Mourinho for the past 17 years, from his early managerial days in Portugal through to his successes with Porto, Chelsea, Inter Milan, Real Madrid and United.

For the time being it seems that Faria, 42, intends to take a break but Mourinho believes he has the credentials to be a manager himself. Indeed, he has even been linked with the upcoming vacancy at Arsenal.

Asked if this felt like the end of an era, Mourinho told MUTV: “Yes, but maybe one day we are playing against each other in the Premier League.

Mourinho and Faria have one more game together as United face Chelsea in the FA Cup final at Wembley next Saturday.

United wrapped up their Premier League campaign on Sunday with a 1-0 win over Watford at Old Trafford.

Marcus Rashford scored the only goal but the main highlight of a largely unremarkable game was the farewell appearance of Michael Carrick.

Veteran midfielder Carrick, 36, is hanging up his boots to take up a position on Mourinho’s backroom staff – although that move was planned before news of Faria’s departure was announced at the weekend.

Initially Mourinho intends to continue without a designated assistant but he hopes Carrick can grow into that role. He already has no doubt he will be able to call on Carrick’s expertise when it comes to identifying new players, particularly in his old midfield role.

Mourinho said: “I have to make the decisions but of course my assistants have an opinion.

“He has, in relation to his position, a different vision than any other opinion that we can have from any scout or any analyst department.”