Home F365 Says Mourinho’s problem? He’s not even the fun kind of bad 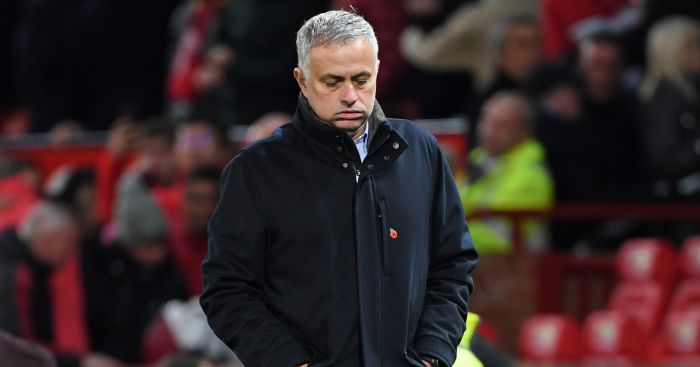 John Nicholson has long espoused his theory that football is chaos, and while a league table can be read as a signal that cuts through the noise, an individual scoreline remains an absolute enigma. There’s a good chance that a 0-0 is a bore draw, but sometimes they are great. Meanwhile, having spent years covering Leagues One and Two, I can confirm that there are such things as terrible 6-2s and stultifying 3-3s.

Likewise, you don’t actually really need any great technical quality on show for a game to be enjoyable. Last weekend’s game between Liverpool and Everton was entertaining throughout  – a word only used in match reports or food heating instructions, incidentally – but the greatest joy of all was in its one moment of sheer comedy. The entire first 95 minutes of the game were retrospectively rendered mere build-up to Divock Origi’s punchline to a well-delivered shaggy dog story.

True story: I did an Highbury stadium tour about 15 years ago, lead by Charlie George. In the trophy room he pointed at a silver sculpture of Romulus and Remus (awarded to the club by AC Roma) and described it as “two kids sucking off a dog”.

…which brings us, very conveniently, as though these words had been carefully chosen by a brain and transcribed through actual fingers, to Arsenal, who last night played out another frankly absurd game of football.

Twice in the game United equalised swiftly in reply to Arsenal goals, and as any man can tell you, faster definitely always means better. Arsenal’s opener involved the ball slipping through David De Gea’s hands; the reply came with three separate defenders failing to cut out a cross. Arsenal went back ahead through Marcos Rojo’s individual error, before Sead Kosasinac took pity and allowed Jesse Lingard in to equalise again.

Man United v Arsenal is very much like this. But it’s wonderful. pic.twitter.com/N3arqWZIH2

Perhaps infected by the festive cheer we football journalists are obliged to mention at every opportunity (we all get a special reminder behind the first door of our advent calendars), every single other side in the Premier League decided to pile in on the fun. This set of midweek fixtures was the first gameweek since November 2010 in which every side has scored. Football finally came home, but only because it had got much too drunk to continue in an orderly fashion.

It shouldn’t be good. It shouldn’t. The reason we pay so much on tickets and TV subscriptions to watch the Premier League is nominally because we want to see the game played well, otherwise we’d all be going down to the local park and enjoying the perennial uselessness of children for free. This seems eminently more sensible than spending hundreds of pounds a year to get angry at the uselessness of adults.

The reason we don’t is for the same reason people enjoy The Room or Plan Nine From Outer Space: because the next-best thing to something being really, really good is for it to be really, really bad in just the right way. There is immense satisfaction to be had in the deeply unsatisfying. Own goals are the right kind of bad (thanks, Rojo); an inability to break down defences is not. Supposedly good teams losing is great (cheers, Chelsea); supposedly good teams playing out a so-so draw is very not.

Seeing both Arsenal and United bumble around so amusingly only made it clearer why Jose Mourinho himself doesn’t capture our affections anymore, which might at least buy him some respite from the neutrals. With his cartoonish Turin wink and his water-bottle slinging tantrum, Mourinho seems too knowing, too arch. At least even Alan Pardew is a kind of human embodiment of The Room, trying so hard to be taken seriously that he becomes ridiculous. United-model Mourinho has become Sharknado, applying what might otherwise be the right ingredients so cynically that nobody can enjoy it anymore.

It seems trivial, but it belies the gradual erosion of what was once an easy way with a bon mot and a cheeky grin – in other words, the very elements of charisma – and in trying to recapture it, he has only made things worse. If he could embrace the fact that parts of what was once a mystique are now just ridiculous, and lean into the endearing kind of bad, we – and his players – might have a little more time for him when things go the wrong kind of bad.