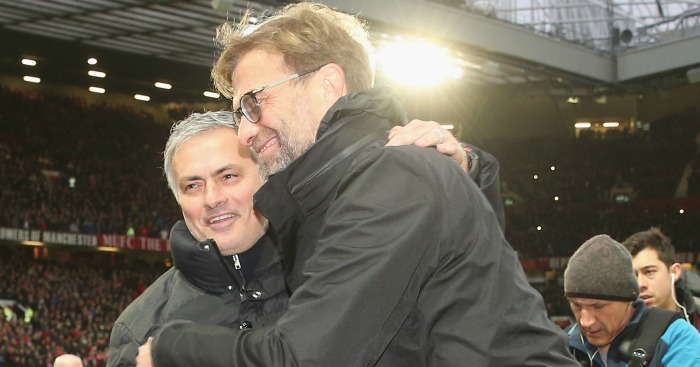 Jose Mourinho has suggested that Jurgen Klopp is guilty of hypocrisy after signing Virgil van Dijk for £75million.

Van Dijk will join Liverpool on January 1 in a world-record deal for a defender.

It represents Klopp’s biggest signing ever, but many were quick to point out comments he made in July 2016.

The German was asked about spending £100m on a footballer – with Paul Pogba expected to become the first player to break that barrier when joining Manchester United at the time – and scoffed at such fees.

“If you bring one player in for £100million or whatever, and he gets injured, then it all goes through the chimney,” he said.

“The day that this is football, I’m not in a job any more, because the game is about playing together. If I spend money, it is because I am trying to build a team, a real team.”

Those comments were brought up once more during Mourinho’s press conference.

“You know, I think the one that speaks about it in a specific way has to be Jurgen and if I was one of you I would ask him about his comments about one year ago, but not speaking specifically about that case because in Liverpool they do what they want to do and I am nobody to comment on what they do.

“The reality is that if they think that the player is the right player for them and they really want the player, they pay his amount or they don’t have the player because that is the way the market is at that time.

“So when we compare now the amount of money certain managers and clubs spend, I am not saying with 10 years ago but three years ago, it is to compare the impossible.

“You cannot compare the realities. Virgil van Dijk is the most expensive defender in history of football, was he better than Maldini, Bergomi or Ferdinand?

“You cannot say that, it is just the way the market is and you pay or you don’t pay.

“If you pay obviously you pay a crazy amount of money but if you don’t you don’t have the player. It’s as simple as that, so no critics at all about what Liverpool did, is just the way it is.