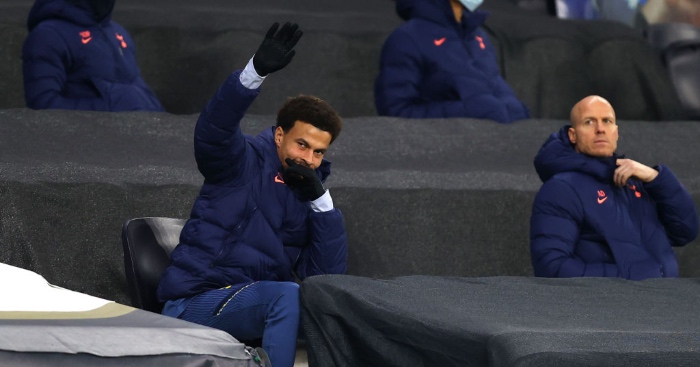 Jose Mourinho said he had no issue with Harry Winks or Dele Alli disappearing down the tunnel during Tottenham’s 2-0 Europa League win over Royal Antwerp.

Spurs topped Group J with the win that was set up by second-half goals from Carlos Vinicius and Giovani Lo Celso.

But Winks, who has been unhappy with his lack of game time this season, headed straight to the dressing room after being taken off before the hour, while substitute Alli joined him shortly after Mourinho had made all five changes.

Alli did return to the bench in his non-playing kit and was the only unused substitute not to take part in a post-match warm-down.

Mourinho revealed he told Winks to go and get changed and has no problem with Alli’s disappearing act.

On Winks, he said: “I told him to go, I told every player that left the pitch to go, because when the weather is cold I prefer they go to the dressing room and have a shower and be warm and safe.

“I told them to go, some prefer to stay. Even cold, they prefer to stay and participate in the game from the bench. Winks decided to go and I am happy with that because I am the one that told him to do it.”

Mourinho also said Alli had his blessing to go to the dressing room but added: “Yep, but let’s not run away from the reality.

“A player that is on the bench and then realises that he’s not one of the five players (coming on) of course is not a happy player, and I wouldn’t expect him to be happy.

After a lacklustre first-half display, Spurs got the job done as Vinicius tapped home after Gareth Bale’s free-kick had been tipped onto the post and then Lo Celso killed the game after being played in by Harry Kane.

Kane, Son Heung-min and Tanguy Ndombele were all brought on after 60 minutes to ensure there were no hiccups, allowing Spurs to top the group and get a favourable last-32 draw.

“Today we got an objective which is not a fundamental objective because the difference between finishing first and second in the draw is not a massive difference, but it maybe helps and we did our job by winning the match,” Mourinho added.

“The thinking was to win the match, a match that we were always in control of. Despite them not creating any chance that I remember, the game was still open and to play 30 minutes is not an accumulation of fatigue.

“To play 30 minutes is less than 90 minutes, 100 minutes training session, so it was not a problem at all and I decided after the 1-0 to bring fresh people and to bring people who could give a last kick in the story of the game, and game over since Gio scored the second goal.”