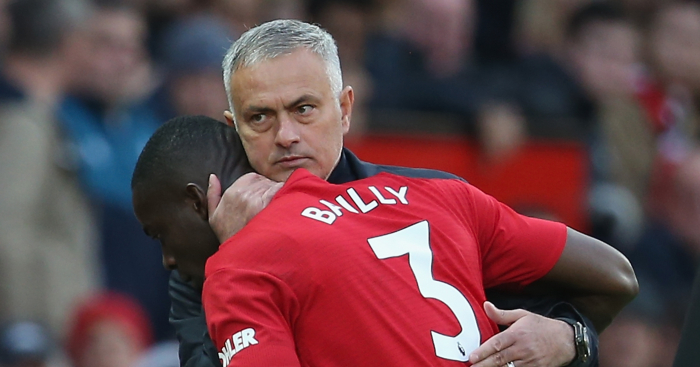 He argues that Manchester United should not be judged against the juggernaut that is Manchester City, which handily gives pretty much everyone a free pass. Just don’t ask why they are so much worse than Manchester City. Just move on…

‘United are miles away and need to accept that fact right now if they are going to move forward.

‘The club needs to allow Jose Mourinho to build on what he has achieved so far.

‘And his two seasons have been an achievement.’

Hmm. Last season ended with them trophyless and 19 points behind Manchester City but do continue…

‘Two trophies in his first one followed by a runners-up spot last season and an FA Cup Final.

‘Only City can show a better return than that over the same time.’

Hmm. Chelsea – with their actual Premier League title and FA Cup trophy (you might remember who they beat in the final) – might want a little word.

Second instinct: Because he’s a bit shit and anyway, can you get a place ‘back’ that is never really yours? After all, Pereira last started for Manchester United over three months ago when they lost 3-2 to Brighton; he was substituted at half-time of that game.

Third instinct: To laugh like nobody is listening and saying ‘why the f*** are they laughing so loudly?’ when reading this sentence…

‘Mourinho is not one for scapegoats but…’

If we were making a list of the ten most Mourinho-like things, ‘scapegoating’ would be in the top three. He is very much one for scapegoats. And tall players. And making people believe that finishing second and reaching an FA Cup final is some kind of ‘achievement’.

Man on
‘JOSE MOURINHO could finally solve his central defensive issues with Roma’s Kostas Manolas, according to reports…Manolas could finally fill the void he is looking for if they can fend off the interest of Juventus, write Corriere dello Sport’ – Sun online.

‘Manchester United boss Jose Mourinho is chasing Roma centre-back Kostas Manolas. The Greek international’s current Roma contract includes a release clause of £31.5m that could make him the club’s priority target at a bargain price. According to Corriere dello Sport, United are closely monitoring developments and could launch a bid in January’ – Daily Star online.

Two has been added to two to make, well, £31.5m. It’s international break maths at its finest.

Desperate? Does he know that they are unbeaten?

‘Sarri-ball, as it is affectionately known, sees Chelsea dominate possession and press high, but RMC Sport report the former Napoli boss wants to take his team’s play to another level.’

No wonder he is desperate. Another level? Freak me.

So off we go to the source – to RMC Sport – and then to Sport Witness for their interpretation of that report. And what an absolutely devastating shock to find that they said nothing of the sodding sort.

Somebody is desperate and it ain’t Sarri.

Drog days are over
Didier Drogba was an excellent striker. But was he ever the best footballer in the world? Was he balls. So quite why Andy Dunn argues in the Daily Mirror that he should have won more individual accolades is unclear. He was probably happy enough with his 12 major trophies at Chelsea, thank you very much.

‘Drogba was never voted Premier League Player of the Month.

Mediawatch is sure that particular oversight has kept him awake at nights. How could he have never been declared the best player in an arbitrary time period of 30 or 31 days?

‘He made the PFA Team of the Year twice, but that was about it.’

Well, he was Premier League top scorer twice – the only two seasons when he scored 20-plus Premier League goals – so that makes absolute sense. Save your sympathy for Sergio Aguero, who has five times gone past the 20-goal mark and only once been included in the PFA Team of the Year.

‘He never once made the top three in the voting for the Ballon d’Or.’

Probably because he was never one of the top three players in the world. After all, only eight players from the Premier League have been included in the top three in the voting for the Ballon d’Or over the last 20 years. It’s a pretty big ask.

‘The closest he came was when finishing fourth behind Ronaldo, Messi and 2007 winner Kaka.’

Mediawatch is impressed. He was also included in the FifPro World XI that year but mention of that honour is oddly missing from Dunn’s tale of woe.

‘In 2006, when Drogba was voted eighth. Fabio Cannavaro collected the accolade.’

Probably because in 2006, Cannavaro won the actual World Cup. Which pretty much always trumps scoring 12 goals as Chelsea won the Premier League.

Barge holiday
When you are a sub-editor at The Sun, you clearly relish the chance to use an ‘Argy bargy’ pun. So it’s little wonder that they did not let a teeny, tiny thing get in the way of their ‘Fab Argie barging to the top’ headline.

That small thing? Fabian Balbuena actually being from Paraguay.

Foxy
‘I just feel Leicester will edge this one,’ writes Mark Lawrenson on BBC. Of course he does. According to his predictions this season, Leicester are in fourth place in the Premier League – ahead of Chelsea, Tottenham and Arsenal.

Liverpool are of course unbeaten. The last time he predicted a Liverpool defeat was May 2016.