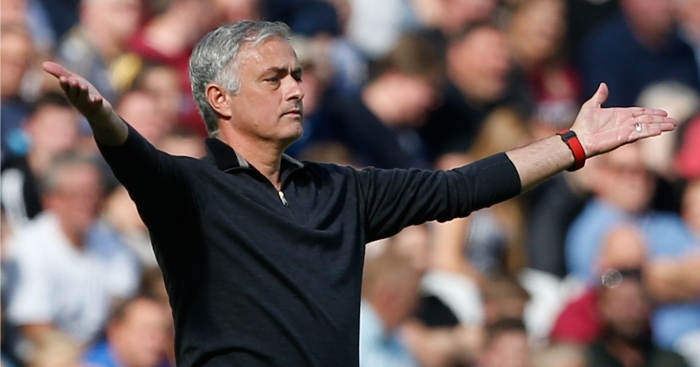 His attitude in that 24-hour window must have been exemplary.

Dinosaur bites
Custis has certainly changed his tune on Jose Mourinho. Perhaps the whole ‘being accused of bugging his phone thing’ has had a negative effect.

In August, The Sun‘s Manchester correspondent was defending the United manager. “The criticism of Jose Mourinho has been way over the top, miles over the top for what I think he has done at Man Utd,” he told Sky Sports. “Liverpool fans and Spurs fans are rubbing their hands – he has won more trophies in one season than they have in 10, 12, 15 years.

“They were the second best team in the country last season and they have played two games and he is having his CV picked apart, he is having his managerial style picked apart. He has made them relevant again. This is a top manager who is being picked apart and being called a dinosaur. This bloke is getting pulled from pillar to post, it is ridiculous.”

By October, the manager is overseeing ‘a total mess’, and ‘it could soon be ‘taxi for Mourinho”.

‘Players used to buy into his management, his theories, ideas, tactics. They did in his first season, as two trophies were delivered. This group are not listening to anything he is saying now.’

No way, Jose
Neil Ashton takes a slightly different tack to his Sun colleague. ‘Mourinho has not given up and tried to get them going,’ he says in his report, laying the blame squarely at the feet of the players.

And he does not end there. He calls the United squad ‘borderline intolerable’, suggests they ‘are barely lifting a leg for the club’, and adds that ‘they did not really want to win’ in ‘another protest performance’.

He also refers to them as ‘an unruly, obstinate bunch of highly-paid footballers’, and that ‘the stars of yesteryear watching on glumly from the stands…could have told these under-achievers a bit about this shirt’.

Is Mourinho not to blame at all, Neil? Not even slightly?

Apparently not, for the chief football reporter then lays into Romelu Lukaku for his ‘heavy touch’, adding: ‘At this level, with his weekly wage, it is unforgivable.’

‘By then, Old Trafford had lost patience with the players, repeatedly screaming “attack” as Pogba, Sanchez and Marouane Fellaini prodded the ball around in midfield. This is not the United way.’

Yeah, they ‘had lost patience with the players’. It was absolutely nothing to do with the manager, who clearly tells them to play that way.

Guide and seek
Martin Keown is here with his ‘BIG MATCH GUIDE’ in the Daily Mail. We’ve asked this question before: Is it a guide to a big match, or a big guide to an ordinary-sized match?

He casts his eye on Tottenham’s clash with Barcelona on Wednesday, and tells the hosts ‘how to stop Messi’. That’s nice of him.

Step one: ‘The key to stopping Messi is to create as much traffic in the middle of the pitch, restrict his space and make life as uncomfortable as possible.’

Step two: ‘When facing him you have to do everything at lightning speed, have quick feet and show great determination to stop him wriggling into space.’

Step three: ‘It is vital that the backline helps them by pushing up to reduce space for Messi.’

Step four: ‘In doing so, they must be careful to stop him making runs in behind, too.’

A finer Messi
Still, Tottenham should easily beat Barcelona. Why? Because ‘Harry Kane believes he can overtake Lionel Messi as one of the world’s all-time greats’. So say the Daily Mirror, anyway.

The website goes even further, stating in no uncertain terms that ‘Harry Kane thinks he can become a better goalscorer than Lionel Messi as he plans to be all time great’. These quotes must be quite something.

“Messi set the standard, him and Ronaldo have gone above the normal standard others have set in years gone past. When you’re scoring as many goals as he is, 40 or 50, 60 goals a season, as a striker I want to match that.

“For me, it motivates me to get even better and improve and one day score as many, if not more, than he has. It’s a great test.”

The Daily Mirror: where “as a striker I want to match that” and “it motivates me” becomes ‘believes he can overtake’ and ‘thinks he can become a better goalscorer’.

Star of David
Just before 6pm on Tuesday evening, ‘David de Gea’ was a trending topic on Twitter. The Spaniard would play for United later that evening, so how did he find himself one of the most discussed topics in the entire country before the game had kicked off?

It all started with a seemingly innocuous update in a live Manchester United blog on the Manchester Evening News website. ‘United squad for Valencia Champions League fixture confirmed,’ it read, sending fans into a panicked frenzy. This was the last thing the club needed.

‘David de Gea was a notable absentee as United’s players and staff arrived at the Lowry Hotel on Monday afternoon ahead of tonight’s Champions League meeting with Valencia,’ the rest of the update read, and the ‘story’ soon became clear. He wasn’t seen arriving with the rest of his teammates, and so he must be unavailable. There is absolutely no other explanation.

You see, the MEN – and they are not the only ones – have done this for some time. They scour pictures of players arriving at the hotel or boarding a plane to travel to a game, see who is there and then dress it up as ‘squad confirmation’, when it is nothing of the sort. In the world of 24-hour news and live blogs, it is a clever way of providing an update where there is none.

What followed was thousands of fans desperately searching for news and clarification. The MEN simply fuelled the hysteria, their live blog going through ‘other keeping options’ at 5.59pm, and predicting ‘maybe two’ changes ‘if De Gea is unavailable’ at 6.38pm. Their man, Samuel Luckhurst, did his part too.

Possible David de Gea won't play for #mufc tonight. Wasn't with the squad yesterday evening after he trained at Carrington earlier in the day.

A number of other outlets were caught up in all the commotion. The Independent reported that ‘Manchester United will be without number one goalkeeper David De Gea for their Champions League tie against Valencia this evening’. The Sun also ran a story on him being dropped, while the Daily Express went with the wonderful: ‘Man Utd news: David De Gea confusion – does star play against Valencia tonight?’ Each outlet attributed their story to ‘reports’ – the MEN had a lot to answer for.

By 6.45pm, United announced their starting line-up, with De Gea conspicuous by his inclusion. Almost two hours of wild conjecture and guesswork had all been for nought.

And it all came about because of the pressures of running a live blog concentrating solely on one club. The MEN did not conjure this story to drive traffic or create a buzz, but they did completely ignore their duty as a supposedly reliable source of information. This is the Manchester Evening News, not the Manchester Evening Speculation, guys.

Storm the Castles
Not one to be upstaged, Duncan Castles ensured that his take was the hottest of them all on Tuesday evening.

Wait until he discovers that Paul Pogba played with pink boots on Tuesday, or that his beloved Manchester United have a pink kit!

Mind you, perhaps he figured it out himself. That is the only explanation for him deleting the tweet within the hour.

Recommended reading of the day
Sid Lowe on Barcelona.

Daniel Storey writes the piece on Leicester that Winty never let him write because it was too miserable.