Home Arsenal Mourinho is playing games with absolutely everyone 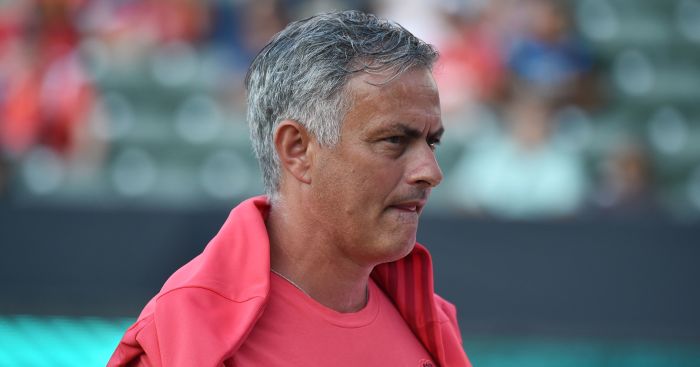 Pep knows
At the start of last season I was a bit trepidatious when faced with the idea of Ferna dealing with pretty much the whole midfield while KDB and Silva did their glorious thing, but it worked.

Now we’ve missed out on a few targets in that DM/deep lying position and signed Mahrez whose signing hasn’t attracted much fanfare and seems to overload the bench. But it’s got me thinking, Pep’s no fool, and whatever you say about him he knows how to spend money. Add to that the amount of times I’ve checked the line up for a game and not been able to work out how they are going to set up and I fall back to the in Pep we trust mind set.

How many times have the champions strengthened what they’ve already got and come out worse? Maybe Pep has started preparing a new system, new roles for key players. Sterling may not have excelled at the WC but he created a lot of space, Mahrez and Sane outwide with KDB coming through the middle for Aguero while Sterling runs the defence in circles sounds lethal, with Silvas D&B to come in when less devastating pace is needed against more defensive set ups. Jesus hasn’t even gotten a mention, it does make me wish we could play 13 aside! Do any other clubs get that feeling?

Anyway if Pep doesn’t sign backup for Ferna then I’ll be just as happy and a bit more excited about how we will set up.
James (didn’t even get on to the kids!) MCFC

Genius One
Jose is a mourgenius. He is lulling the world and more importantly, our competition, for the forthcoming season into a false sense of security in thinking that we’re not gonna be a threat to them. Meanwhile behind closed doors the players he does have at his disposal are quietly confident in their chances of winning serious silverware this season (prem/ucl). On top of that his tantrums will simply inject a little urgency into the people (Ed) who’s responsibility it is to get the final one or two signings needed to strengthen us just a little more.

The pre-season has done wonders for Peirera and even though Jose’s history suggests he has little time for the young uns – producing and developing youngsters is steeped in this club’s history and he hasn’t shunned this tradition so far. Namely Rashford and McTominay have been given their chances. Peirera deserves his chance to shine now and I think he has done enough to get his chance. As for Martial, the next few days will be telling if Mourinho has lost his patience with him.
Rahul Patel

Striker light
I agree with Rory, Cape Town completely and that brings me to my issue with Chelsea’s recruitment so far. Chelsea needs a goal scorer (about 30 goals a season standard). Be it a support/wide forward or a natural no. 9, all truly successful teams have at least one.

The top four last season all had one or two and Madrid and Barcelona, have won UCLs with GKs who had their ability questioned. Football fans have become quite cerebral about football, extolling tactics and strategies over the value of raw ability. But I believe that while tactics can make up for a shaky defence and to a lesser extent midfield, it can’t cover for a lack of a genuine goal scorer in a team with grand ambitions.

Morata is a top player but I just haven’t seen that ruthless finishing you see in the top 1% of strikers in him. I already assume subconsciously that strikers like Lewandowski and Aguero have scored immediately they get in certain positions but I fear Morata will miss or hit the keeper every time, no matter how good the chance is and based on last season, that proved to be the case many a time.

If Morata must be sold to fund a move, fine. If he can stay and compete with a more assured goal scorer, better. While Morata is obviously a better all round player, I would trust Batshuayi (who isn’t good enough in his play yet to start) with a clear cut chance over Morata. Hazard is obviously better than the numbers he puts up in terms goals but is ridiculously good nonetheless, and, Willian and Pedro have never been great goal getters at Chelsea.

While more world class players in every position ultimately makes the team stronger, if I had to choose I would take buying a true world class goal scorer over upgrading the promising options at center back.
Lawrence, CFC (Thought that would take four lines) Abuja

Hart attack
To Rob, LFC – Joe Hart’s expectations are that he is a starter for a Premier League club, that’s the issue (as mental as that expectation is). Also, he’s been awful for the last 2 years, really awful. Liverpool would be better off looking at a solid youth player or at least buying a number 2 who is a reliable back up.
Glen, Stratford Spur

Pros:
Get some of that sweet Head and Shoulders dollar to go with the Nivea war-chest

Cons:
Is a bit rubbish
Always struck me as a massive blurt
Will not want to be back-up
Will likely bitch and moan if he was back-up
He has a very blocky head
Did I mention he is a bit rubbish?

Stan’s the man
I haven’t written in for a while since I haven’t really felt the need to. However, Adonis’ email drove me to send this in.

I don’t really understand all the hate and vitriol towards Stan Kroenke. Why would a business man who aims to make more money out of the businesses he owns want them to do poorly? Why would he approve of the premature departure of Arsene Wenger if he is happy with mediocrity?

I ask fans like Adonis to have a look at the current state of the Los Angeles Rams (previously St. Louis Rams) as a perfect example. The Rams were slowly sliding down the NFL rankings due to poor performances. What followed was the sacking of their coach and a resurgence that the team had not seen since the early 2000s.

If you want to write off the new Arsenal team before they have even played a competitive match, feel free to do so. However I don’t see how the man who gave the green light to the huge overhaul is to blame? He got the right coach, the necessary players and now hopes to reap the rewards.
Malcolm, AFC

On Fulham’s return…
I thought I’d write in today about what is going on at Fulham. A mate at work supports them and so I’ve been keeping tabs on what they’re up to. This is a team that played really good football last season and are looking to kick on this season in the Premier League and I don’t think very much has been written about their prospects (as far as I can see).

Signing Mitrovic, Schurrle and Seri to add to Sessegnon looks pretty good to me. Who knows whether Schurrle will finally work in this league but Seri and Mitrovic have every chance of doing so. In fact, I wanted us to get Mitrovic as he is young, powerful and a decent goal scorer. He seems happy at Fulham too. He is very underrated in my opinion. Apparently Cairney is awesome, although I confess I don’t know much about him but am promised he suits the league.

Defence however is where they are struggling, unless they get Alfie Mawson. Either way, this looks a mid-table squad to me. It will be really interesting to see how they get on but I would suggest they are the strongest placed promoted sides coming in to this season.
JazGooner

…People may take your outrage at other websites clickbaiting seriously if you stopped doing things like this.
Mark Jones, Liverpool