Home All The News Mourinho: Kane and Son are doing ‘special things’ 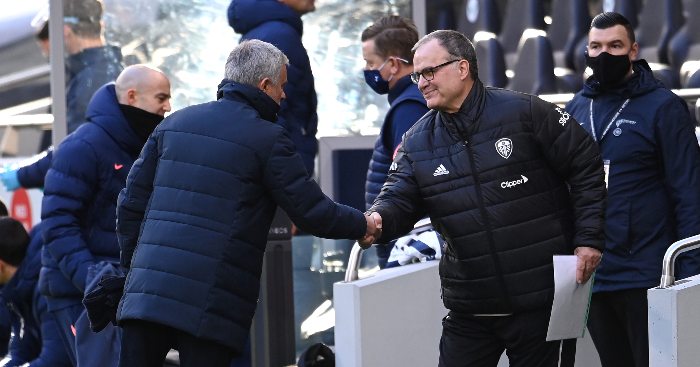 Tottenham were gifted a chance to take the lead just short of the half-hour mark. Ezgjan Alioski brought Steven Bergwjin down in the area and the spot-kick was calmly converted by Harry Kane.

Their lead was doubled before the break as Kane and Heung-Min Son* combined once again. The Englishman’s pinpoint cross was finished off brilliantly by Son for his 100th Spurs goal.

Toby Alderweireld headed Spurs into a three-nil lead in the second half to complete a convincing victory.

Tottenham were without a win in four league games before this one. But this victory moves them up to third and they are now just four points adrift of Liverpool and Man United at the top.

Speaking post-match with BT Sport, as cited by BBC Sport, Mourinho insisted that despite the victory, his side can still do a lot more:

“The three points are very important. I think we understood how well they could hurt us and how we could hurt them. In that aspect I am happy but I still think we can and have to do better.”

[On Kane and Son partnership] “Their understanding is good and against Leeds, it was important to have that ability in attack. They stay man-to-man so if you stay static you give them an easy job. That movement of Harry Kane and Sonny in the finishing positions fit well.

“I think in the Premier League there are many good players everywhere even in clubs where you don’t believe they can have great players. But I have to say that Sonny and Harry are doing special things this season.

“I want goals coming from other players and I want them to feel like they can express themselves. We had Toby [Alderweireld] of course in set-plays. We have players from other positions appearing in finishing positions which is what I want from them.

“When we played the people who are considered the top six people say easier games are coming but I, of course, don’t believe it. Leeds are difficult and Aston Villa is my favourite team in the Premier League at the moment. I enjoy watching them, they have good players and very well-coached. This is up next.”

[On COVID-19 cancellations] “I go back to the initial rules of if you have 14 players available you have to play. I don’t see another reason for not doing it. Every club does the best for their players to keep them all safe but then there are moments in private lives which you cannot control. Not everyone can be blamed so we have to carry on. If somebody has some positives, we have to play.”

*Buy Heung-Min Son and thousands of other players on Football Index. 18+, UK and Ireland customers only, begambleaware.org. T&Cs apply.