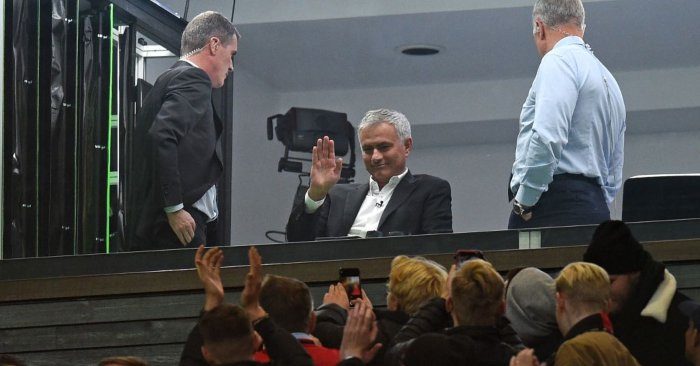 Jurgen Klopp has always endured rather than embraced the nuisance of punditry. “They talk constantly,” he said last season. “It doesn’t make more sense because of that. It is so easy to sit in an office or a studio and talk about things like that. It is a massive difference to be in charge and talking about somebody in charge.”

He was, to be fair, issuing a rebuttal of sorts to a piece of advice from Gary Neville that, in retrospect, seemed more Machiavellian than helpful.

Neville himself would happily admit – and indeed has – that management and punditry are not natural bedfellows. One is predicated on critiquing the other, often without a right of reply. It is not a healthy, mutually beneficial relationship.

Jose Mourinho probably never expected to straddle the two worlds so seamlessly. Exactly one month after telling Sky Sports that Klopp “didn’t like the menu” served at Old Trafford during a 1-1 draw with Manchester United, he was being unveiled as Tottenham manager.

“He likes meat and got fish, so he was not happy,” the Portuguese said, referring to the more defensive style deployed by his former club. “They are, of course, much stronger playing against opposition that gives them chances for transitions and counter-attacks.”

Mourinho would go on to describe United as “solid in the back” and “always compact”, while Liverpool displayed their “limitations against teams with low blocks”. “They can smash opponents that play the way they want to play against,” he added, identifying a problem for which he must find the solution this weekend.

He might consider himself fortunate to have largely admired this Liverpool side from afar until now. The Reds were operating at a fraction of their current capabilities when United beat them 2-1 at Old Trafford two months before they lost in the 2018 Champions League final. Having held them to three successive Premier League draws beforehand, it took until December of that year for Mourinho to suffer anything close to their unremitting wrath.

That 3-1 defeat, in which Liverpool had 36 shots – Dejan Lovren and Virgil van Dijk combining for as many efforts as United (six) – mirrored the scoreline Mourinho’s Chelsea suffered in Klopp’s first ever Premier League win in October 2015. It represented a watershed moment for the current league leaders.

Liverpool had beaten Tottenham 2-1 and drawn with Chelsea, Manchester City and Arsenal already that season. Beating United so convincingly was a statement, a final seed of doubt summarily ripped from the roots.

It was also Mourinho’s final game in charge of United, and his most recent against the Reds. On Saturday, Klopp could become only the fourth manager to ever win successive Premier League matches against the Portuguese.

Thanks for taking part in today's edition of Managerwang! https://t.co/cj88BUFqbZ

Pochettino (January and August 2018) was the third man to do it, narrowly beaten by Hughton.

But who managed it before them both? https://t.co/N7eCIcaNtc

But this is why Mourinho was appointed: to solve problems, answer questions. This is precisely the sort of game and scenario for which many said Tottenham sold their soul. Mauricio Pochettino was brilliant but unproven and capable of only 90% of the race before suffering stitch. Mourinho is a winner, a big-game manager, and could complete the final sprint. He thrives under the spotlight, feeds off the rivalry, parks the bus and does whatever is necessary to thwart a direct rival, if not beat them.

Yet Tottenham surrendered to both Manchester United and Chelsea under his tutelage. The problem is not that they lost, but that they were entirely insipid in doing so. There was no bite, none of the stubbornness that has underpinned Mourinho’s most iconic performances.

Against Liverpool, there is nothing and everything to lose. A lack of expectation, even at home, plays in their favour. A realisation that defeat deepens their current purgatory does not. Club and manager must face some uncomfortable home truths if there is no discernible improvement.

Klopp welcomed Mourinho back into coaching in November by joking that he was clearly “desperate” to return. The Portuguese, for his part, described punditry as “a learning process” and “an amazing experience”. At the very least, it gave him a front-row seat and a crucial insight into how to change the “menu” to stop his next opponent. His response will reveal everything we need to know about Mourinho in the modern age.