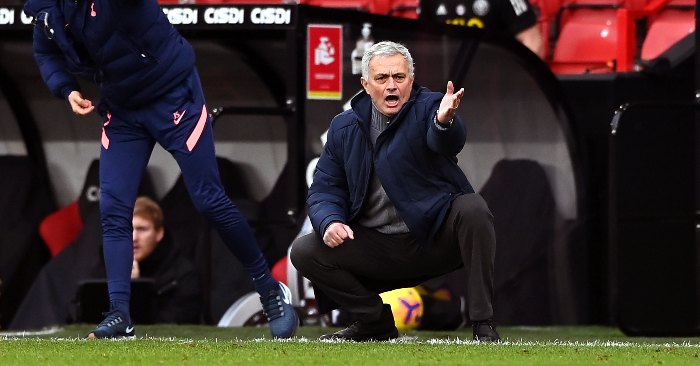 Jose Mourinho has heaped praise on Tanguy Ndombele after he shone once again as Tottenham beat Sheffield United at Bramall Lane.

Tottenham made a bright start and they were in front after just five minutes. Serge Aurier rose highest in the area to convert Heung-Min Son’s corner.

Son almost doubled their lead moments later. Harry Kane freed his strike partner, who attempted a cute chip over Aaron Ramsdale that rebounded off the post.

F365 Says: Ndombele sparkles as Spurs play to their strengths

Spurs’ lead was doubled just before the break. Sheffield United lost possession and Kane punished them as he clinically found the bottom corner from the edge of the area.

The hosts did improve after the break, though. John Fleck sent in a brilliant cross that was headed home by David McGoldrick to give United hope.

But just three minutes later, Spurs were back in control once again. Ndombele superbly lobbed Ramsdale from a tight angle to make it 3-1.

That was how it finished as Tottenham move back into the top four. Prior to Liverpool vs Man United, Mourinho’s side sit three points behind Ole Gunnar Solskjaer’s men.

Speaking post-match, as cited by football london, Mourinho insisted that “special credit” must go to Ndombele for his improved form:

“It’s the second or third time [Ndombele] has played for 90 minutes. He’s playing high intensity football and it’s not easy for midfielders. His performance was very good.”

“I give special credit to Ndombele. Is the player’s desire to earn and win a place in the team. Mr Levy’s input is some but it is small. It’s on the player.

“It’s true that Mr Levy had some conversations with him and to tell him that we believed in him. The same for me and my door is always open, but the player has to walk through. It’s not for me to go and bring them through.

“It’s a great example [with Ndombele], the door is always open, door of the team is always open, and when a player is not playing he has to try to understand why, he has to try to understand how can he walk through that door. He understood. The goal is amazing, but I don’t care about that, I care about the performance, the performance was magnificent, I’m really pleased he’s come to this level, he’s playing very, very well.”

Mourinho added: “[Rodon] played well, he did many things well, a couple of things not so well, but he is a player that was playing in the Championship, a young guy, he has to learn. He has to learn, he has to make mistakes, he has to play, he has to not play, we have to give him conditions to perform. He is a good player who can become much better. I am happy with his performance.”