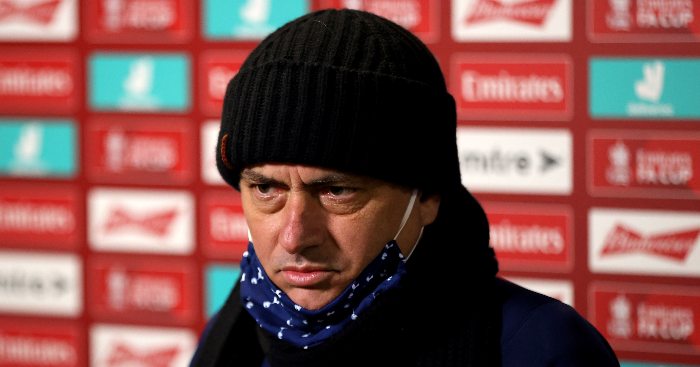 Jose Mourinho has joked with Tottenham forward Carlos Vinicius over his English after he netted a hat-trick against Marine in the FA Cup.

The youngster scored 24 times from his 47 appearances for Benfica last season. This led to his summer move to Tottenham, as he joined the Londoners on a season-long loan deal.

Vinicius has only managed to make two substitute outings in the Premier League this season. But he has three goals and three assists from his five Europa League appearances.

The striker was also handed a start as Spurs travelled to face eighth tier Marine in the FA Cup third round.

Vinicius bagged a first-half hat-trick as Tottenham eased past their non-league opponents. As cited by Football London, the forward was pleased to net his first Spurs hat-trick:

Mourinho was eager to find out about how Vinicius’ interview went before offering his own post-match thoughts:

“[I will answer] only with one condition. I want to watch the interview with Vinicius speaking English. I want to understand the quality of his teacher, Lucas Moura.”

The Spurs boss later praised the starlet for his performance in the FA Cup, labelling his third strike as an “amazing goal”:

“It’s good for Carlos, and the third goal really is an amazing goal. The other two are what I call striker’s goals, easy goals but you have to be there to make it easy.”