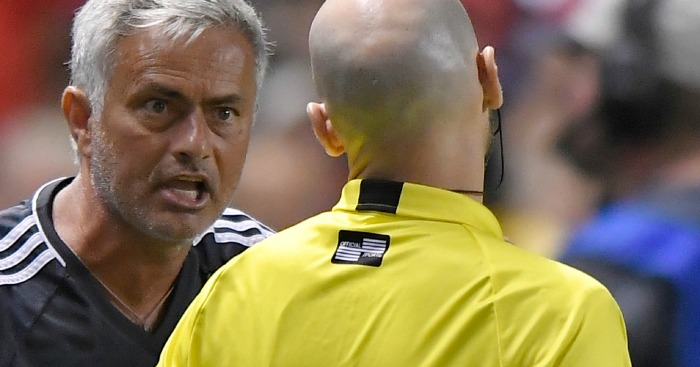 After kicking off their pre-season tour with a 5-2 win against the LA Galaxy, United made the two-hour flight from their California base for a test at altitude against Real Salt Lake.

Romelu Lukaku’s first goal in a United shirt wrapped up a 2-1 victory at Rio Tinto Stadium, where Luis Silva gave the Major League Soccer side a deserved lead that was cancelled out by Henrikh Mkhitaryan.

All three goals came in the first half – but what the second period lacked in goalmouth action, it made up for in flashpoints.

Mata went off with an ankle complaint sustained in a challenge by RSL substitute Sebastian Saucedo, who was then forced off after a tackle that earned Valencia a red card.

“I think the delay was because the referee asked me to change the player and I didn’t because I don’t agree with the card,” Mourinho said.

“Saucedo, I think is the name of the boy, was really aggressive during all the second half

“What happened to Mata and some other actions was a bit dangerous, which I understand – young people with enthusiasm playing against Manchester United.

“But you come with a mentality of a friendly match and in the end you find yourself in a different mentality.

“But it’s pre-season, no problem. Also a good experience for us to play with one player less.”

Mata was taken off and Matteo Darmian was seen hobbling out of the stadium, but Mourinho does not believe either are seriously hurt.

“Mata has a big ankle but hopefully nothing really important,” the United boss said.

“I would say a few days, a week, something like that, in principle. And Matteo I don’t even think is an important problem.”

In fact, Saucedo appears to have come off worse and was seen with crutches on his way out of Rio Tinto Stadium.

Real Salt Lake head coach Mike Petke defended his player in the wake of Mourinho’s comments as he respectfully disagreed with a man he calls his “mentor” and “favourite manager”.

“Oh man, I am trying to skate around this one right here,” Petke said with a laugh.

“I’ll say this, Sebastian got hit pretty hard a couple of times and I don’t know if the Mata situation happened before.

“I can tell you my opinion is that, having coached him and knowing him on a personal level, there was no intent. He was just playing hard.

“It would be like if the New York Yankees went over anywhere around the world and played another team. The team would play extremely hard.

“If the Golden State Warriors went over to Europe, every team would be playing hard.

“You know, it’s like the US Open Cup when MLS teams go and play so-called lesser teams – which they are not but lower-division teams – and it’s their championship, their World Cup.

“So perhaps that is what some of our guys (were like). I know it wasn’t intent from Sebastian whatsoever.

“But I don’t know if you saw, I walked halfway across towards the Man United bench and that was to tell them I’d like them to put somebody back on.

“I don’t want to play a man up. I want my guys to get a real game against one of the best in the world.

“I don’t think there was an intent with the Mata thing and I think that was a red card with what happened with Valencia.”