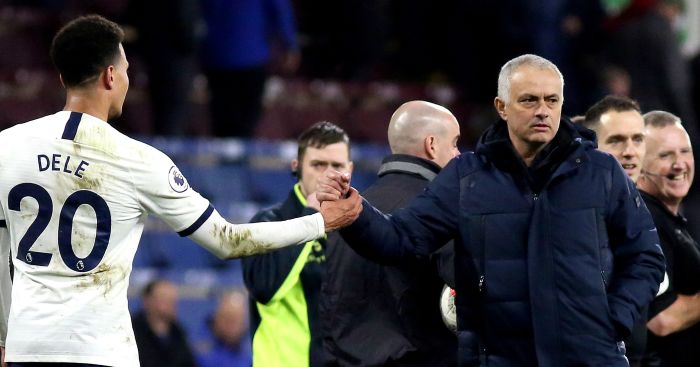 Jose Mourinho hinted that he was unhappy with the performance of Tottenham’s record signing Tanguy Ndombele after Spurs turned in a woeful first-half display before rallying to draw 1-1 at Burnley.

With Spurs hugely fortunate to be only 1-0 down at the break, Mourinho replaced Oliver Skipp and Nbombele with Lucas Moura and Giovani Lo Celso at half-time, and, while Skipp came in for praise, Mourinho revealed he was unhappy with one of the players he took off.

Pointedly refusing to name the Frenchman specifically, Mourinho told Sky Sports: “I think the quality and the dynamic of Lucas and Lo Celso they made a difference. I want to say but I cannot say. We had something in the second half that we did not have in the first half.

“I was expecting players (who are) not tired to give more to the team and I think somebody has to realise that this is the Premier League. I think this is a new experience and the first time he comes to Burnley and I hope that next season he can be fantastic because until now it is not enough.

“Skipp is a kid in evolution and I never, never want to criticise a kid like him.

“The problem was that in the first half we did not have midfield players to get the ball and assume the responsibility of moving forward from the back. Many times we had to go long because midfielder players were hidden. In the second half, they were showing themselves all the time.”

Mourinho added: “In the first half, I must work to try to improve. But coaches need the players to co-operate in that work of their improvement and evolution.

“I hope that he uses every minute on the pitch and every minute of knowing what the Premier League is to improve. There are many fantastic players that in first seasons in new countries… they struggle.