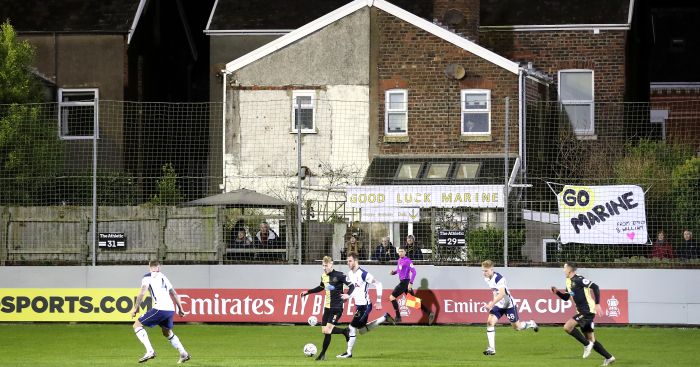 “The way to respect them, and the way to make it beautiful for them, is to go there with a good team and win the match. I understand the dream, and it’s up to us to bring them back to reality.”

Jose Mourinho was true to his word, and, in the end, everyone can probably be reasonably happy about that. Spurs got the win without too much fuss, Marine didn’t let themselves down and everyone can go home happy. Marine’s ground, with all those houses backing on to it, also turns out to be the very ideal venue for behind-closed-doors covidball. Some very sturdy sheds and less sturdy-looking trees all deployed for safe football viewing without having to leave your own property. This may well prove to be the final chance for ordinary punters to watch Premier League footballers up close this season.

Mourinho picked a strong side and sent them out to do a professional job. Which they did, scoring four goals between the 24th and 37th minutes to make sure nothing untoward happened. Marine didn’t get their goal, but did get the “What if?” moment to talk over in the bar for years to come when Neil Kengni rattled Joe Hart’s crossbar from distance when the score was still 0-0. That’ll do.

Spurs will be happy to walk away with Carlos Vinicius helping himself to a confidence-boosting hat-trick. The sight of Gareth Bale replacing Dele Alli was one that everyone at Marine could enjoy. If a Marine goal was the realistic Lovely Thing that was hoped for from this game, then a 16-year-old scoring for Spurs was perhaps the next best thing. A good goal it was too, Alfie Devine becoming Tottenham’s youngest ever first-team goalscorer and ensuring that at the very, very least his career will always be remembered for more than that time he got booted up in the air by Danny Drinkwater.

But this is 2021 and we’re all so very online that you can’t just have something nice. Vinicius absolutely lashing the ball in from three inches out for the opening goal and then performing his trademark celebration was, objectively, good and funny and to be encouraged. He was doing nothing more than embodying his manager’s definition of respect: giving it absolutely everything and treating Marine away as he would any other fixture. His celebration of his first goal was every bit as good to see as his disappointment when failing narrowly to score his fourth and Tottenham’s sixth deep into stoppage time long after the contest had been ended.  People obviously complained that he was kicking the ball too hard and celebrating too much after his first goal, while simultaneously showing far more disrespect to Marine by patting their beer-purchasing goalkeeper on the head for not being a hologram.

Marine didn’t need a pat on the head, and they deserve unequivocal genuine praise for the first 2o or so minutes. Spurs, to their own credit, were fully switched on and professional from the first minute but were still frustrated by a well-organised side who showed enough ambition on the counter in their own rare spells of possession that Mourinho must surely have seen a team after his own heart.

Then Dele Alli took over for a bit, and the gulf in class that had been sporadically evident became overwhelmingly so. It’s a hiding to nothing in a lot of ways, of course, Dele doing nothing that we didn’t know he could do and haven’t seen him do to better opposition than this over a number of years, but it was still fun to see a bit of the old Dele mischief. From 0-0 to 4-0 in a blink of an eye and any frustrations or nerves in the Spurs camp was gone. Vinicius got his hat-trick, the first two goals from a combined total of one yard three inches and the third the highest quality of the night with a cleverly conceived and delicately executed sort of clipped lob to give even the non-hologrammatic keeper no chance. Marine can also count themselves unfortunate to have found themselves on the receiving end of the one goal Spurs score each season from a direct free-kick.

Ultimately, this was a decent evening for an FA Cup third-round weekend that could have been far worse. It still feels faintly bizarre that it’s even happening in the face of everything that’s currently going on – the sight of hundreds of people lining the streets of Crosby waiting for the Spurs bus was an uneasy one – but while there may be a cost to be counted in the coming weeks this FA Cup third round has been… okay, if not quite full of Magic(TM). This match showed that as much as any other.