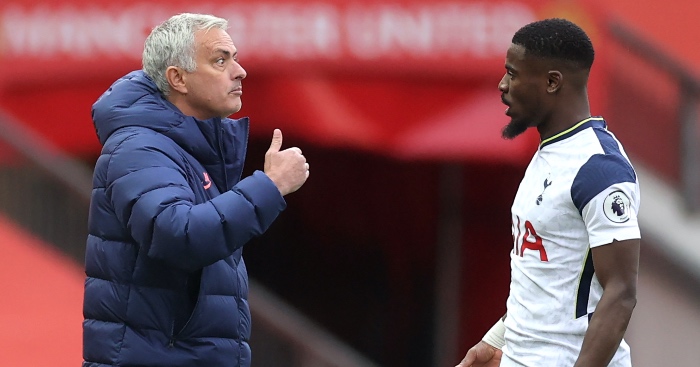 Serge Aurier was not included in Tottenham’s squad to face Brighton on Sunday after a reported bust-up with Jose Mourinho at half-time against Liverpool.

The right-back was substituted at half time in the 3-1 defeat to the Reds and apparently left the stadium in a huff.

The Telegraph claimed: ‘Kane was forced off with injuries to both of his ankles at the break, while Aurier did not reappear for the restart after being replaced by Harry Winks.

‘It is understood the right-back left the ground in a move that will no doubt have angered head coach Jose Mourinho, who was forced to answer questions on whether or not there had been a half time fall-out.’

While the Mail reported: ‘Tottenham players were involved in a fiery half-time inquest during the loss to Liverpool on Thursday night in scenes that resulted in Serge Aurier storming out of the stadium at half-time.

‘There was fury at the poor defensive errors that led to Roberto Firmino’s opener just before the break which sparked angry exchanges between players.

‘Jose Mourinho took the decision to substitute Aurier at half-time a decision which infuriated the defender, who promptly left the stadium.’

Spurs slumped to a 1-0 defeat away to Brighton on Sunday to ramp up the pressure on Mourinho, who addressed the Aurier situation after the game.

When asked whether Aurier’s absence was due to his reaction on Thursday, Mourinho said: “It’s a technical decision, and I’m happy with the decision because Moussa played very well.”

He was then asked whether it was his decision…

Moussa Sissoko was used as a right-wing-back ahead of Matt Doherty, whilst Aurier was nowhere to be seen.