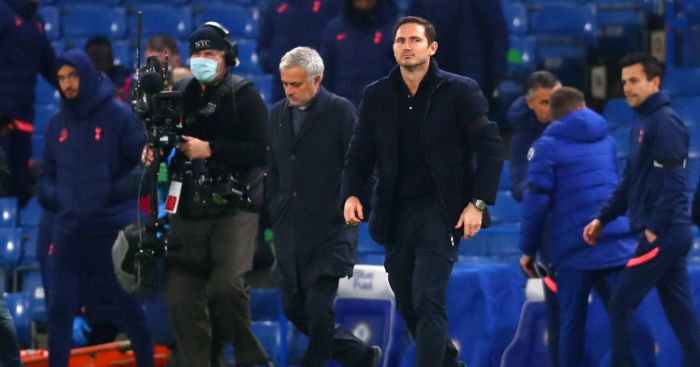 Tottenham showed little ambition in the stalemate, with the visitors rarely threatening in a game in which Chelsea dominated possession.

But Hoddle says Mourinho’s “got it right” tactically.

“Tactics won the game. It was 0-0, but it was tactics,” former Spurs and Chelsea star Hoddle told Premier League Productions.

“Chelsea found it very hard to break Tottenham down. Spurs in the first half looked as though they could break and score. Second half, there was hardly an attack from Tottenham, they were poor with the ball, but they will take it because that’s what Jose wants to do. He knew that he goes top of the league with a point, that’s what it’s about.

“The next game for Spurs, it will be different, there will be a different theme to how he sets the team out. That was because Chelsea are so free-flowing and if you give them a lot of space, they will tear you apart. Jose, tactically, got it right.”

While praising the tactical nous of Mourinho, Hoddle also believes that Lampard is starting to get Chelsea moving in the right direction.

He added: “Chelsea were a side where if they had an awkward spell in games, they would be dominant for 20 minutes and then have a 10 to 15 minute spell where they would take their foot off the pedal with the ball and they looked vulnerable at the back, and they normally conceded.

“It was a pattern. As a manager you always look for patterns, if there is one there then you think ‘we need to put that right’.

“He [Lampard] went and bought the goalkeeper, [Edouard] Mendy, and that has tightened that up. I think Thiago Silva is a great acquisition for them on a free transfer, his experience. With [No’Golo] Kante playing as that central midfield holding player, I think that is what has really tightened it up. Tactically, he has got that spot on and he has got the balance right.”