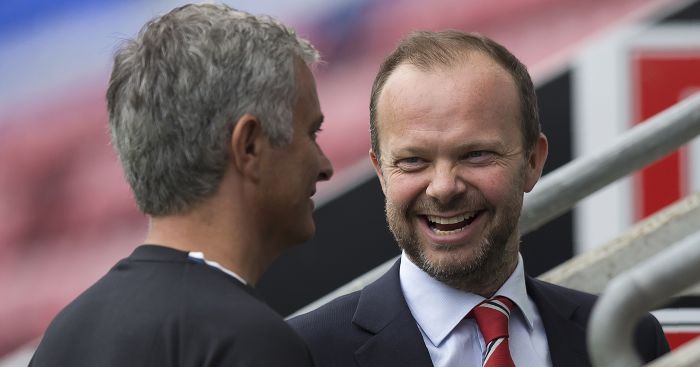 Jose Mourinho thought the scheduled meeting in which Ed Woodward sacked him was actually to discuss transfers.

United decided that the 11-point gap to fourth place after 17 games – which is already down to eight points after 18 games – represented a poor return on their sizeable investment since Mourinho’s appointment in summer 2016.

The manager’s style of play was also a point of contention, as was the lack of development in younger players.

But Mourinho ‘was caught unawares’ by Woodward, having gone into a scheduled meeting with the club’s executive vice-chairman expecting to discuss transfers.

Duncan Castles of the Sunday Times adds that Mourinho ‘had hoped to secure the green light to strengthen his struggling team,’ but he was instead informed his contract was being terminated.

Mourinho knew that his future beyond the season was ‘in jeopardy’, but ‘did not expect’ to lose his job with more than half of the Premier League campaign to go, and with Champions League knock-out football secured.

‘Mourinho’s contract contained a public disrepute clause. United are understood to be concerned that it is adhered to in the aftermath of his exit,’ adds Castles. Mourinho already has someone willing to act as his public mouthpiece/lickspittle; he doesn’t need to say anything himself.