Mourinho had a 'lengthier than normal' chat with Woodward that has been described as 'positive'. 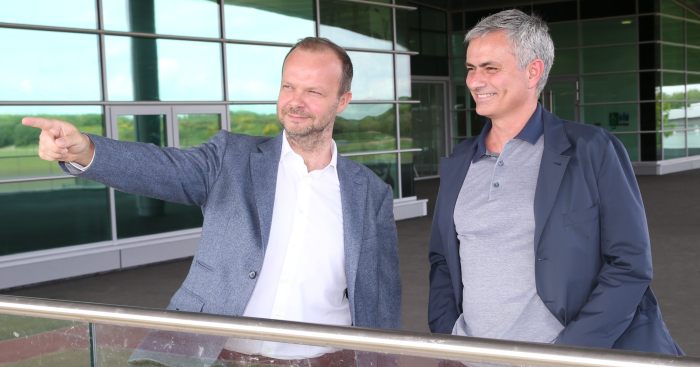 Jose Mourinho’s job as Manchester United manager appears safe for now after a ‘lengthier than normal’ conversation with Ed Woodward.

Mourinho’s future has been cast in significant doubt after United slumped to their second defeat in three games against Tottenham. Read 16 Conclusions.

Spurs inflicted upon Mourinho his heaviest home defeat as a manager, and some are already bidding him goodbye.

But United seem unlikely to call time on the Portuguese’s tenure just yet, with Mourinho and executive vice-chairman Woodward enjoying a ‘positive’ talk after the loss.

According to Mike Keegan and Jack Gaughan, the pair ‘held a long chat which focused on what was an encouraging first-half performance’. Onlookers noted that the conversation was ‘lengthier than normal’.

The Times report that the Portuguese ‘retains the backing’ of the board despite their difficult start, and that he ‘has not lost the confidence’ of those above him.

The Guardian say that United ‘see cause for hope’ in their opening three fixtures despite two defeats, and that the board were ‘encouraged’ by the first half ‘in particular’.

Woodward was particularly impressed with ‘the response engendered by Mourinho’ after the Brighton loss, and ‘there is no move to even consider his future as manager’.

Confidence @ManUtd remains that Jose Mourinho can turn present situation around. Sympathy for manager's view that first-half performance last night was a very good one. Burnley (1pt from 3 games and Europa League match to play on Thursday) next.

Has 45 minutes in a 3-0 loss ever taken on such importance and mystique?