Home All The News Mourinho: Why McTominay beat Matic to my Player of Year 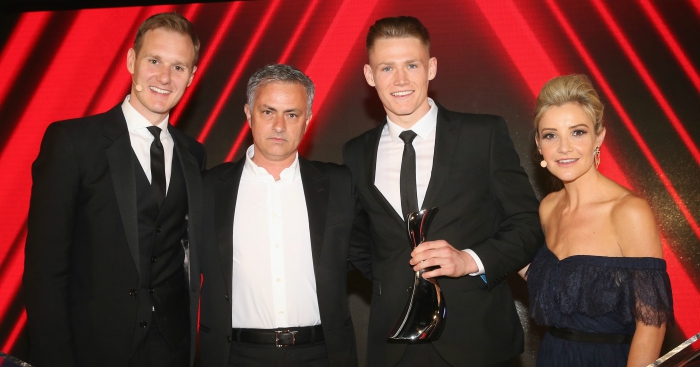 Jose Mourinho invented a new award at Manchester United’s end of season do to hand to Scott McTominay.

David de Gea was named the club’s Player of the Year yet again at an awards dinner on Tuesday evening.

But Mourinho was eager to recognise the achievements of McTominay, who has broken into the first team this season.

The Portuguese unveiled a Manager’s Player of the Year award to hand to the midfielder.

“My player of the year has to be Scott McTominay,” he told MUTV, before explaining that he also considered giving a nod to Nemanja Matic.

“I was going for him, but then I understood in two awards for young players Scott was not getting one, I changed my mind because it wasn’t acceptable.

“He is the one who has done everything. He started the season in the academy and ended it playing big games in the Premier League. I thought this kid can not go home without an award.

“I always say that for me there are not young players or old players, it is just about the quality of the personality and this kid has everything that I want so I think that it is good for the younger boys in the academy to look at him as an example of player.

“We know it is important to have players like Jesse Lingard and Marcus Rashford that were born in the club, but it is right to have the right profile. Scott gives to other players that the dream is still alive.”

Mourinho added that he was not a fan of the design of the award.

“The award is not very nice,” he said. “But the meaning I think is important. I think the dream of every boy that arrives in the club is to play for the first team, to play big matches, and in the Champions League, and to play eventually for the national team. This player did this everything in five or six months.”

McTominay had his say.

“A huge thank-you to the manager for what he’s done for me, both on and off the pitch, he’s been an incredible figure for me.

“It’s been an incredible year for me and I want to keep pushing forward now.”