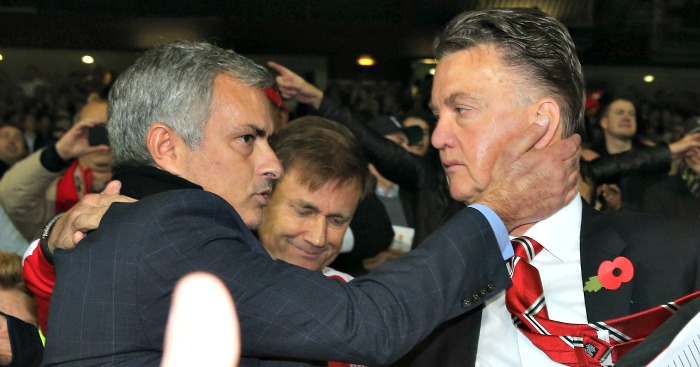 Jose Mourinho has issued a not-so-subtle dig at his Manchester United predecessor Louis van Gaal in the build-up to the Manchester derby.

Having taking over from David Moyes, Van Gaal initially made United’s target to finish in the top four, rather than aiming for the title.

“I hope we shall succeed and that we are this year in the top four, because the Champions League suits a club like Manchester United,” Van Gaal said in August 2014.

“A lot of clubs fight for many, many years and never succeed.”

However, Mourinho believes that Old Trafford is not a place where you can aim for anything but the title.

“We have a good family group; we’re together and enjoy the responsibility to work for a club with a history like this,” Mourinho said.

“When you arrive at a club like Manchester United, you cannot have defensive words.

“You have to go direct to the target and say that we want to win the title.”

If you think that this dig isn’t specifically aimed at Van Gaal, you’ve not been following Mourinho closely enough.

Mourinho describes Guardiola as 'a very good manager.' Reports all players fit. 'Nobody is out of the game. We are ready. We are waiting."