Now the important one is sorted, maybe Woodward might get to work on Martial, De Gea, Herrera and Mata... 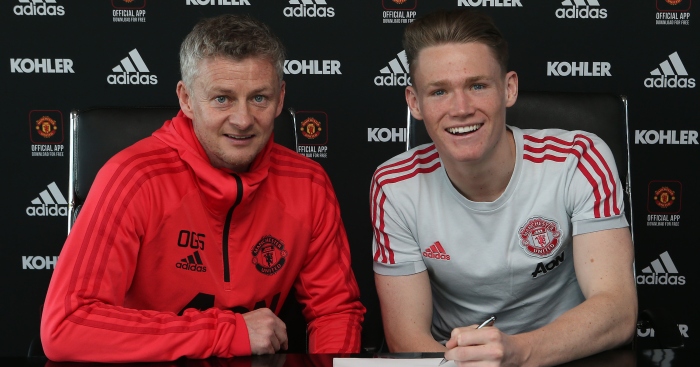 Scott McTominay has committed his future to Manchester United, signing a new contract which runs until June 2023 with an option for a further year.

The 22-year-old midfielder has been linked with a loan move in recent days but United’s caretaker manager Ole Gunnar Solskjaer responded to the speculation by revealing work on a new deal was under way, with his future in Manchester.

The academy product told the club’s website: “Manchester United has been my life since the age of five and playing for the club I’ve always supported is all I’ve ever wanted to do.

“I’m still young and I’m learning all the time from the manager, his coaching staff and from the world-class players in the squad.

“I can’t wait to continue my progress at this great club.”

McTominay has made eight appearances for United this season, but since the arrival of Solskjaer in mid-December, has played only a handful of minutes – his only appearance coming as a late substitute in the 1-0 win over Tottenham on January 13.

That led to suggestions he could seek a loan move to gain more playing time, but an injury to fellow midfielder Marouane Fellaini made that more unlikely.

In announcing the new deal, Solskjaer said he believes the Scotland international has a bright future at Old Trafford.

“Scott has been with the club from a very young age, he has progressed through our academy ranks and has made fantastic progress in the last couple of years,” he said.

“Scott is a young midfielder and is constantly improving. He’s an intelligent player and wants to learn all the time.

“I am delighted he has signed a new contract and there is no doubt that he has a bright future ahead of him.”