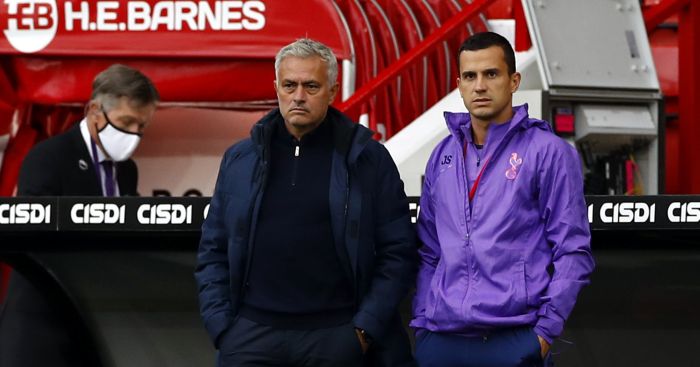 “Every team in the world would struggle with five or six of their most important players missing. It’s as simple as that. All the players on the Leipzig bench would play at this moment in my team.”

“We are speaking about a very difficult situation. And if I could – if I could – I would move immediately to the first of July.”

He had a point, as well. Spurs were without a host of key players; Mourinho wanted them back and the chance to work with the squad pre-season before people passed judgement on his high-risk return to club management.

Even at Manchester United, Mourinho’s winning mentality got them somewhere before it unravelled. Spurs have proved beyond his waning powers.

Mourinho will point to misfortune in this damaging 3-1 defeat at Bramall Lane and not without some justification. The rule that disallowed what appeared to be an instant equaliser just after the half-hour was correctly applied, but is a silly rule that will be viewed as a bizarre curiosity once it is inevitably replaced with something that produces slightly less nonsense.

And there is no doubt that Sheffield United are a horrible team to find yourself trailing. Spurs made it easy for them, but they played the second half to perfection. Under Chris Wilder, the Blades have now won 53 and drawn nine of 62 games when ahead at the break. It was a record that never really looked under threat here, and that is what should worry Spurs.

Pointing to VAR disappointment cannot disguise or excuse the apathetic sludge that followed. Look at West Ham’s response to this sort of double VAR-opposition goal setback against Chelsea and compare that to what Spurs offered at Bramall Lane.

Spurs’ challenge at half-time was to put the disallowed goal behind them and respond, as the Hammers did against Chelsea and indeed as Sheffield United themselves did at Spurs earlier in the season. It was a test of character, and Spurs flunked it.

The defending for all three goals really was staggeringly bad, and staggeringly bad in the precise same way each time. Neat, fast passing move around static and bemused defenders. Low cross to unmarked attacker standing between some more bemused defenders. Goal. Watch the replays for the second closely and you can just about spot a group of lads from Nuneaton forming a protective barrier around Eric Dier lest anyone should try and tear him down.

Mourinho and Spurs have a real problem here. The return of Harry Kane, Heung-Min Son and Steven Bergwijn has in truth done very little to improve the general quality of football. The defending remains abysmal in the face of any kind of quick movement. Mourinho has had time to work with his players and impose his ideas on them. It’s still unclear what, if anything, those ideas are. Unless Mourinho can do what he promised during his transparent Cheerful Jose act when unveiled at Spurs and show he has something new to offer, it’s hard to see how this is worth persevering with for either party.

This season has now gone, just as Mourinho wished it would back in the ancient history of February. They are well out of Champions League contention, the Europa League is far from assured and they currently sit below this Arsenal side. And thanks to the unique shape of this season, Mourinho’s excuse well is already running dry. All that’s left to play for is some evidence of an idea or a plan to make things better for next season. It’s hard to see it coming, and even if it did there seems little reason to imagine it would last anyway.

Right now, this is a manager and club just wasting time.