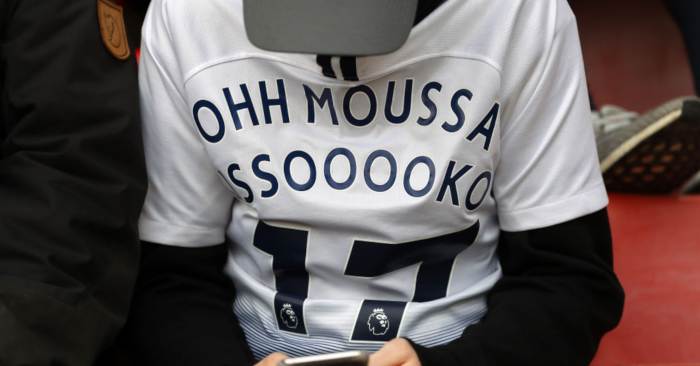 Change usually comes in gentle increments rather than quick bursts, and that’s particularly true in football. Just as a player tends to sink helplessly into bad form, he tends to emerge from the darkness in stages too: a good pass here and an excellent tackle there, as he slowly and carefully climbs back up the mountain.

Moussa Sissoko’s ascent has not followed that pattern. Until the end of 2018, his Tottenham career had not only be a personal disappointment, costing him his place in the French national team, but also a source of collective angst. £30m of Daniel Levy’s money is an awful lot of money and the outlay on Sissoko back in 2016 came at the expense of other, theoretically more useful alternatives.

A complex issue, then, but Sissoko stepped out of that fog suddenly late last year – at Molineux in November.

Mauricio Pochettino’s faith in the player hadn’t quite been unwavering, but it had evidently begun to strengthen in the weeks before. Sissoko had started and contributed to the win over West Ham at London Stadium and, the next week, gave an encouraging performance in the defeat to Manchester City on that terrible Wembley pitch. But it was at Wolves when that faith began to show in the stands.

As with almost everything to do with Tottenham’s season, this happened by accident. That was the night when Mousa Dembele made his final appearance for the club, limping off after just five minutes. Pochettino was bold in response, replacing Dembele with Son Heung-Min and leaving Sissoko in an awkward looking pivot with Harry Winks.

It would be more convenient if that partnership had worked perfectly right away and if, between them, Winks and Sissoko had spent the rest of the game patrolling the middle of the field and locking a talented Wolves side out of the game. That didn’t happen. Spurs raced into a three-goal lead, ceded control of the game halfway through the second half, and then spent the rest of it prodded and pocked into near-submission. Juan Foyth conceded two penalties which were both converted, Raul Jimenez missed a clear one-on-one chance and had the match lasted another ten minutes, Wolves would have taken at least a point.

My notes from that night aren’t particularly instructive. There’s something about Erik Lamela, which proved to be nonsense. There’s a vague point on Lucas Moura’s unlikely ability in the air, which was less silly, and some very premature conclusions about Foyth, which obviously died on the vine. And then it just says ‘Sissoko!’.

That’s perfect, actually. Six months later, he is someone upon whom Tottenham actually depend and who the supporters fear being without, but hearing his name over the tannoy in November still made everyone feel uneasy. But he was excellent. His performance came in trying conditions and in less than ideal circumstances, but he was everywhere – not necessarily doing any one thing with outstanding merit, but lending a hand all over the pitch, putting out fires in his own half and setting them in the opposition’s.

He hassled and yapped at opponents. He retrieved the ball. He won headers. He carried possession forward. Part of his contribution was fairly rudimentary and, at times, restricting to him running the ball away from his own goal in long, straight lines. No matter; it was incontestable proof of his worth and, while his role clearly wasn’t second nature to him, what he didn’t do he was willing to camouflage with relentless enterprise. Of course his name boomed out of the stands on the far side; nobody could have asked for anymore.

Previously, he’d enjoyed good moments, making surges to win applause or killing a counter-attack by covering vast amounts of ground, but never before in that kind of concentration. That night, when Spurs were a big muddle and a balanced midfield was just a distant hope, there wasn’t a single Tottenham fan who wasn’t glad that he was on the pitch.

He may not have authored any compelling statistics at Molineux or satisfied any technical criteria, but he was a force in that game, determined to influence it in as many different ways as possible. It was a flawed performance, certainly, full of imperfections and positioning faux pas, but it was still one of the first times he had appeared as advertised, providing the utility Pochettino had first envisaged.

So, from that happy accident developed this sustained period of good form. Sissoko has not been Tottenham’s Player Of The Season, but they likely wouldn’t have had a season at all without him. Toby Alderweireld and Jan Vertonghen have frequently been outstanding and Son Heung-Min has often been incendiary but, were it not for Sissoko, those banks of quality would have been disconnected on opposite sides of a midfield no-man’s land.

On Wednesday night, Sissoko and Spurs will head to the Etihad for the second leg of the Champions League quarter-final and, to an extent, their progress will depend largely on his performance. By Tuesday afternoon, it had been revealed that Harry Winks had failed to make the trip north; never mind, thought the fanbase, Sissoko will find a way to fill that hole too. A year ago, that kind of dependency would have been terrifying, but tonight there’ll be no trepidation. Manchester City are favourites, the entire sport is now comically slanted in their favour, but who better to lead this ramshackle Spurs – which has been so disfigured by injuries and under-investment – than the player who has to do the most to keep its engines running?

It fits this story’s arc, too. Sissoko has been a successful reclamation project at a time when perseverance in football is falling out of fashion. That works both ways: at the top level, clubs and players have such relative wealth that whenever they stumble into a relationship which doesn’t work, it’s now too easy to give up and look elsewhere. Perhaps that’s not quite as true at Tottenham, where the purse strings are drawn so tight, but Sissoko – even with his reputation damaged – could certainly have found a better basic wage somewhere else and, more importantly, a fresh start.

And why shouldn’t he have done so – what was the motivation to stay and fight for his future? No player exists in a vacuum – they hear everything that everybody else does inside a stadium. He will have felt the mirth drawn by his bobbled touches in the past and been cut by the derision which periodically rippled around Wembley. Sissoko hasn’t been victimised – he isn’t Jorginho and Tottenham aren’t Chelsea – but the neither was he encouraged out of his poor form by any great show of faith.

That’s one of those struggles which the public isn’t privy too: what kind of extra pressure does it exert on a player when the crowd is against him – how does it complicate his thought process? What goes through his mind when he’s receiving a ball he should control easily. Or when he’s faced with a simple pass that he would never misplace in training, but which seems loaded with consequences when 60,000 people are watching and nearly all of them are expecting him to fail. Those are the moments which a player worth his fee and wage is meant to make the game look simple, but also, inconveniently, when the internal gremlins shout the loudest.

That’s what Sissoko has had to overcome. His success owes a lot to his playing style and the very direct south-to-north approach that originally piqued Pochettino’s interest. But for that to become relevant, he has had to escape the inhibiting legacy of his first two years at the club. Today, he is still not the most technically accomplished midfielder and nor has the range of his influence really grown; he is no more of a goal threat, no more of a creator. But the dramatic change can be seen in his conviction – in the authority with which he now strides into space or recovers the ball. This is a player who now believes in himself. One who has quietened those voices and over-powered all that doubt. There’s a reason why that kind of recovery is rare and why, generally, club careers play out across a shallow bell curve: disrupting cycles and correcting trends is difficult, and most players would rather find another contract than try.

This has been a journey, one for which Sissoko is owed plenty of admiration. In retrospect, what made that night in the Black Country so affecting was not his literal performance, nor the result it helped his team achieve. Instead, it was the sensory aesthetics of the situation: the sight of him growing slightly bolder with every touch and the sound of the travelling supporters reacting to him and gravitating towards a player who had been so distrusted for so long.