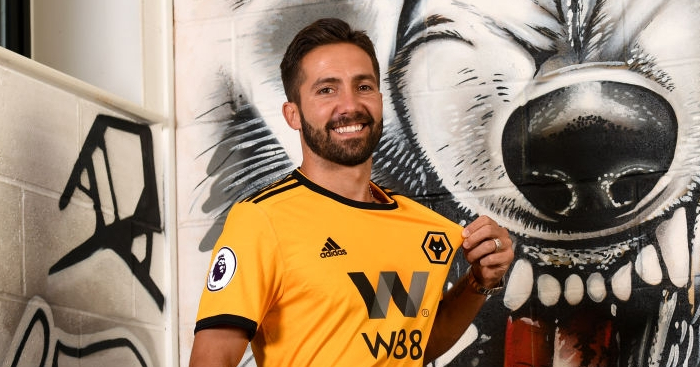 The Portugal international completed his move from Monaco to Molineux in a £5million deal and has agreed a two-year contract.

It is a statement of intent from Wolves, who won the Sky Bet Championship title last term, as they prepare for their return to the top flight after a six-year exile.

Moutinho, who won Euro 2016 with Portugal, has spent the last five years at Monaco.

He won Ligue 1 last year while he also claimed three Primera Division titles with Porto, along with the 2011 Europa League.

He joins fellow Portugal international Rui Patricio at Wolves with the pair having played at the World Cup together this summer. It is yet another coup.

Patricio joined from Sporting Lisbon after terminating his contract following an attack by fans on the club’s training ground but Sporting have complained to FIFA and want compensation.

Moutinho told Wolves TV: “I’m very excited it’s a new experience with a great club. I hope to help the club achieve their objectives. And I want to help the team, the players and club to progress.

“I hope we can win all the games. I know it’s very difficult with big teams in Premier League but our mentality, my mentality is to play every game to win and I hope with my experience and my quality as a team we can achieve our goals and our objectives.

“This club is a big club and a very good project and have players I know very well and I hope to help this club progress more and more and win the most games as possible. I hope Wolves can do good things in the Premier League and the other competitions.”

Moutinho does not believe switching countries will prove to be a problem for him having done so previously when moving to Monaco and feels the Portuguese influence at Wolves will help him settle in.

He said: “I hope they (Patricio and manager Nuno Espirito Santo) are going to help. It’s the second time I move country. I changed Portugal to France and France to England. I did this in Monaco and the club went from the second division to the Premier Division (Ligue 1) and i hope to do the same. To win is my mentality.

“It’s one of my objectives to play in the Premier League and now is the opportunity and I hope to help a lot this club. I’m going to do everything I have to to help.”