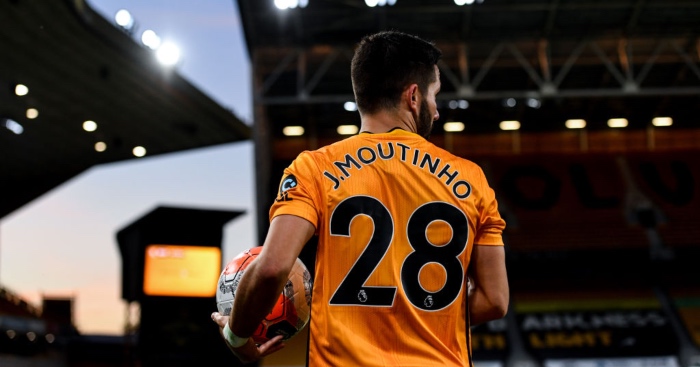 Joao Moutinho has made 58 appearances for club and country this season, more than any other player in the whole of Europe. He turns 34 in just over a month. In an underestimated team that have come so close to sneaking into the Champions League, he is the most understated among them.

Nuno Espirito Santo’s team is built in his image. And Moutinho – of all of them – is the closest to an on-pitch embodiment of the manager’s ethos and philosophy. He’s got the low heart rate, assuredness in possession and an unwavering belief in the game plan. Nuno directs from the sideline; Moutinho does it on the pitch.

It’s no surprise the midfielder has started all but three Premier League games – Nuno knows he can’t afford to leave him out. Other managers opt to reduce an older player’s game time, reticent to overplay them and risk burnout. But Nuno has cited Moutinho’s age as a plus in what has been an incredibly tightly packed season for Wolves.

“Joao is an important player because he has the experience to know at each moment what the game requires. He’s experienced, and he knows the importance of how to handle a very tight schedule of competition – what you have to do during that process. He’s a natural competitor. He loves the game, he loves to train, and he loves to compete.”

What Moutinho does on the pitch often can’t be measured in goal contributions, and Wolves’ opener was the perfect example. He didn’t score, and won’t claim the assist. But the assist for the assist was what made the goal.

You can take your pick for the onomatopoeic one-syllable synonym for a pass to describe Moutinho’s lofted ball into Matt Doherty in the Crystal Palace box: dink; jab; stab. There was a short backlift before he struck the ball and the quick withdrawal of his boot following the contact. It was an example of mastery of a very difficult skill.

João Moutinho, once again, proving that age is merely a number. What a sublime pass in behind which is eventually bundled home by his pint-sized compatriot, Daniel Podence. pic.twitter.com/qMXRpzevcJ

Doherty’s run into the box was typical, but brilliant, but his task to cross the ball to Daniel Podence to head in was made simple through the accuracy of Moutinho’s chip. It was really the only discernible piece of real quality in a very poor half of football at Molineux.

First-half sluggishness isn’t unusual for this Wolves side, but neither is an increase in tempo and monopoly of possession in the second. Moutinho and Ruben Neves completely controlled the game after half-time, and it quickly became apparent that Palace had no hope of getting back into it.

And when you have such expert supervision of a game in the centre of midfield, space will inevitably be created for the pace and trickery of Traore, Podence or whichever danger Nuno opts to select in the wide areas for Wolves.

It was Traore for the second goal. Full-back Tyrick Mitchell – making his first start for Palace – was beaten for strength and speed as Traore jinked inside him on the right. Comparisons with Aaron Wan-Bissaka look more to do with the timing of his emergence from the Palace academy and position rather than anything else. But while playing against Traore could have been Mitchell’s making, it won’t be his undoing. His time may yet come.

Once Traore had cut inside, his cross found its way to Jonny who turned expertly and fired into the corner. Wolves deserved it, they were worth at least a two-goal victory.

They have now eclipsed their points tally of last season, and could miss out on Champions League football by just one point. They are – and will continue to be – undervalued and dismissed, because that’s who they are, and Moutinho is the most underrated of the lot.