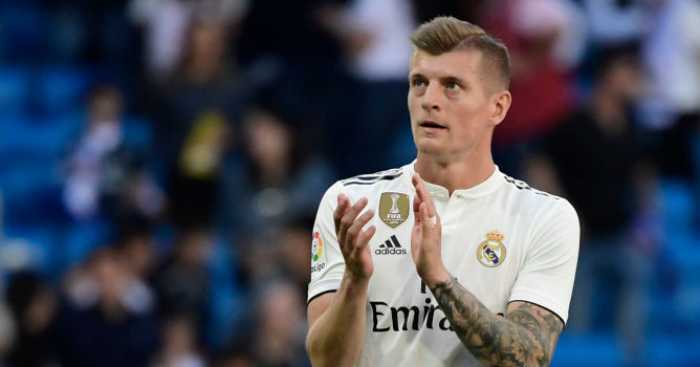 Real Madrid have agreed a contract extension with midfielder Toni Kroos, the Spanish club have announced.

The new deal ties the Germany international to the Bernabeu until June 30, 2023. Manchester United were stupidly linked with him back in March. They will be devastated.

Kroos joined Real from Bayern Munich in 2014 and during his five years in Madrid, the club have won 12 trophies, including three Champions League titles and one La Liga crown.

Despite that impressive record, Kroos had been one of a host of players being linked with a summer move away from Madrid amid speculation of major squad overhaul by the 13-time European champions following a poor season.

However, Los Blancos have ended rumours about his future by giving the 29-year-old, a member of Germany’s World Cup-winning squad in 2014, a one-year extension to his existing deal.

Kroos made over 40 appearances for Madrid in all competitions this season but was unable to help them replicate their success of recent years.

They did manage to win the FIFA Club World Cup once again, but otherwise came up short in LaLiga, the Copa del Rey and Champions League – where they were looking to claim a fourth-successive triumph.

In LaLiga they finished third, 19 points behind champions Barcelona and having suffered 12 defeats, which is their worst record this millennium.

Real also had three different coaches during the season, with the record-breaking Zinedine Zidane returning to take the helm in March following the short-lived tenures of Julen Lopetegui and Santiago Solari.