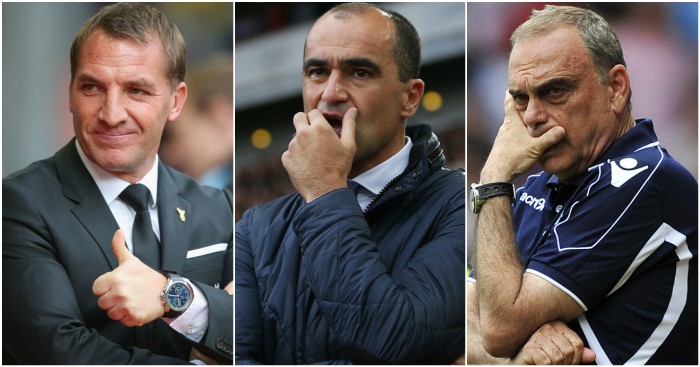 Roberto Martinez (Everton)
Things went sour for Bobby Martinez after a very encouraging first year at Goodison. Perhaps that caused the Spanish manager to lose perspective because his second season with Everton was littered with moments of pure delusion.

Positivity was everything to Martinez, so much so that routine, mundane occurrences were consistently described as ‘phenomenal’ or ‘incredible’. The positivity extended to his tactical approach, with the dirty defensive work largely ignored on the training ground. Martinez’s assistant Graeme Jones was quoted in Leon Osman’s autobiography as saying: “Why would we spend two hours standing around to defend three set-pieces when we could work on moving the ball?”

Like most managers, Martinez built up his players, but too often to the point of ridicule. On Tom Cleverley, he said:  “I think you do not have a better English player. Technically, he is as good as you get. For me he is one of the most sensational you are going to see in Premier League history.” And John Stones could be “one of the greatest players England has ever seen,” apparently.

Sir Alex Ferguson (Manchester United)
Martinez is certainly not alone in talking up his own players, with even the greatest managers sometimes getting carried away.

Ferguson, after watching Phil Jones play eight Premier League games, said in 2013: “Jones, arguably the way he is looking, could be our best ever player. I think Jones may be one of the best players we have ever had, no matter where we play him.”

Jones doesn’t deserve the stick he gets and were it not for injuries, he may well have become a United lynchpin. But to suggest he could eventually be placed in the same bracket as Best, Charlton, Edwards and Ronaldo did not help anyone.

Avram Grant (West Ham)
West Ham’s diabolical 2010/11 season owed as much to ineptitude as delusion, though ‘deluded’ is the only way to describe the approach at Upton Park if the hierarchy ever thought Grant was going to rescue the Hammers.

Grant restored his reputation at Portsmouth where, despite being relegated, his nice-guy persona won him a lot of admirers, especially in the wake of his reign at Chelsea. Davids Gold and Sullivan – not Karren Brady, she made that quite clear when the sh*t was being splattered by the fan – gave him a four-year contract but it was clear he was not up to the job of managing, motivating or organising the squad.

From November onward, the manager and owners waited for each other to put everyone out of their misery. Grant ploughed on despite being undermined at every turn, with Martin O’Neill approached to replace the Israeli after Christmas. He was not wanted by the players, fans or owners, yet Grant carried on regardless as the Hammers plummeted to the Championship, but at least he got his pay-out.

The owners were either naive or deluded in persisting with Grant, though both had been around the block for long enough to recognise the warning signs. Everyone else could see it coming, but apparently not Gold: “I honestly believed with the players we brought in in January and the imminent return of Thomas Hitzlsperger, we had done enough to pull clear of danger.”

David Moyes (Manchester United)
Before Moyes failed in Spain and Sunderland, perhaps his mitigation for failing so spectacularly at Manchester United would have carried more weight. Now everyone simply recognises he was out of his depth.

Nowhere were Moyes’ flaws more exposed than in the transfer market. Not helped by the naivety of Ed Woodward, Moyes went about his first transfer window with the enthusiasm and acumen of a schoolboy playing Football Manager. Moyes talked about Bale, Ronaldo, Kroos, Fabregas and Pogba. He got Marouane Fellaini, and even then he had to pay £4million more than he would have had to earlier in the window.

On the pitch, Moyes was clueless. Under his watch, United went from champions to sixth, yet still he persists with the notion that he was harshly treated and that United had ‘betrayed their traditions’ in dispensing with him so soon.

“Manchester United was a club with great traditions, traditions where they tended to pick British managers,” Moyes claimed. “That tradition has now gone. They were a football club who enjoy traditions with the way they spent. They didn’t try to compete with all the other clubs. They did what they thought was the right thing to do and spent the right way.”

United broke the British transfer record eight times before they left Moyes in charge of the team.

Brendan Rodgers (Liverpool)
The former Liverpool manager’s demeanour and soundbites spawned the @DeludedBrendan Twitter spoof, and though it was hardly original satire, Rodgers’ biggest problem was that it was often difficult to tell the difference between reality and parody.

Being:Liverpool didn’t help, with the club effectively sanctioning documentary makers to paint their new, raw manager as a David Brent figure, though Rodgers’ relish at the sound of his own voice was the greatest factor.

An unexpected-but-failed title tilt in 2014 almost justified the bluster, but Liverpool fans eventually grew tired of hearing the same tired lines, generally involving ‘outstanding character’, regardless of the result.

“After that opening spell, when they had too much space, I thought it was a near-on perfect away performance,” he tried to convince Liverpool supporters after a 2-0 defeat at Zenit St Petersburg during which both goals came in the second half.

For more Brendanisms – genuine, not spoof – head this way.