Home All The News Moyes: ‘Outstanding’ Meslier kept Leeds in the game 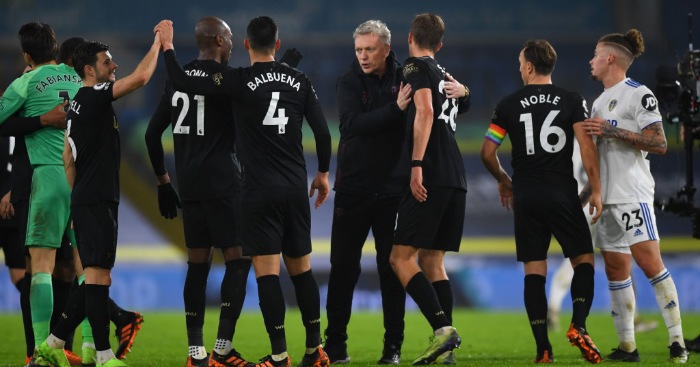 Leeds went ahead early on from the penalty spot. Patrick Bamford was brought down by Lukasz Fabianski as the home side were awarded a spot-kick after just six minutes.

Mateusz Klich stepped up to take, but his tame effort was saved by Fabianski. Shortly after, VAR ruled that the kick should be retaken as the goalkeeper was off his line as he saved the penalty.

Klich stepped up again for the second attempt. He made no mistake that time around, as he finished well into the bottom corner.

From here, West Ham were clearly the better side. David Moyes’ men really brought the game to Leeds and they could have won more comfortably.

Tomas Soucek levelled for the Hammers with a header in the 25th minute. Despite forging numerous chances throughout the game, the score remained 1-1 late into the second half.

But this changed in the 80th minute as West Ham struck again from a set-piece. The ball was sent to the back post and it was headed home by Angelo Ogbonna.

That was how it finished as West Ham earned themselves a valuable three points at Elland Road.

Leeds remain 14th in the Premier League for now, but they could be overtaken by Arsenal if the Gunners beat Burnley this weekend.

West Ham meanwhile move up to fifth with this victory. They have six wins from their opening 12 Premier League games this season.

Speaking with BBC MOTD after the game, Moyes criticised the decision to allow Leeds to retake their penalty:

“It’s a really good result but we had another setback after 30 seconds. There are some terrible decisions that are happening at the moment.

“Whoever saw it must have had [Fabianski’s foot] x-rayed. The decision was rubbish.

“We had periods where we had big chances. Their young keeper was outstanding tonight and kept them in game. To come to Leeds and get a result is really good.”