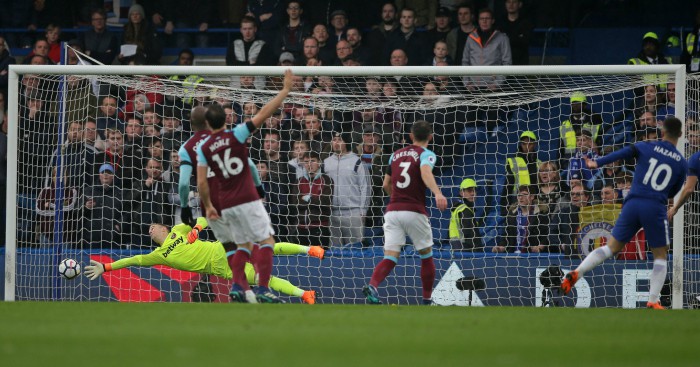 The goalkeeper’s World Cup spot is under threat after a difficult season which has seen him dropped by Hammers manager David Moyes following some unconvincing performances.

Hart was not used in either of England’s friendlies against Holland and Italy last month, with Jack Butland and then Jordan Pickford getting the nod, while Burnley’s Nick Pope is also in the frame.

But the Manchester City loanee is back in favour under Moyes and at Stamford Bridge showed glimpses of the form which made him the Three Lions’ undisputed number one not so long ago.

Hart made a fine first-half block to deny Willian when he was clean through, and after the break tipped Marcos Alonso’s fierce drive over the top before palming Olivier Giroud’s header around a post to preserve a point for his side.

Moyes said: “Joe Hart showed why he has so many caps and so many medals, so that will be good for him.

“Whoever plays Chelsea needs a good goalkeeper because they always make chances. We have more big teams to come and we will need our keeper to play well.”