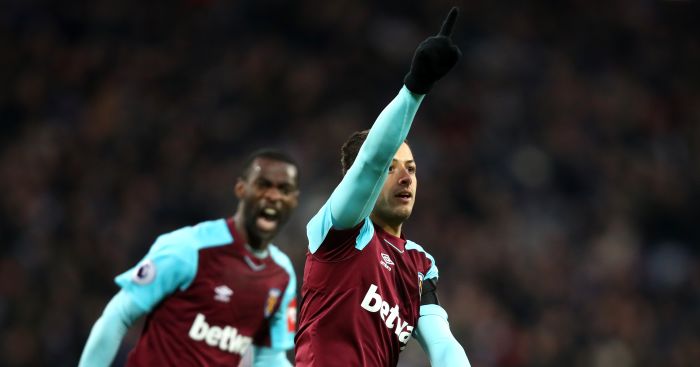 David Moyes expressed his hope that Javier Hernandez will score goals for West Ham over the weeks and months ahead after dismissing speculation of a January move for the Mexico striker.

Hernandez scored his first goal since October as the Hammers came from behind to draw 1-1 with Bournemouth, extending their unbeaten run to seven games.

“We need ‘Chicharito’. The sort of goal he got today might be typical. So we need to try to get a lot more balls in the box.

“And hopefully he’s going to score a lot more goals for us in the weeks and months.”

Moyes insisted West Ham could not afford to lose more players, due to the size of a squad which is depleted by injuries.

There was another concern as Manuel Lanzini went off with a suspected hamstring injury, having played the whole 120 minutes against Shrewsbury on Tuesday night.

Moyes added: “Lanzini’s a worry. It looks like a hamstring. We’ll get it scanned tomorrow.

“We asked him in midweek to work and work again today. I think that might be where it’s broken down.”

The Scot described the first-half performance as the best of his reign, which began in November, but admitted it tailed off as the rigours of the FA Cup extra-time replay win over the Shrews caught up with his side.

“I thought we probably played our best football since I’ve taken over,” Moyes added.

Lanzini was key to much of the Hammers’ good work.

After initially being unsure about all the fuss around the Argentinian, Moyes has been impressed, and particularly by his link-up play with Marko Arnautovic.

“He’s forming a really good understanding at times with Marko, albeit today we didn’t get the bit of magic to get a goal,” Moyes added.

Asmir Begovic denied Arnautovic from point-blank range after 14 minutes and Bournemouth took the lead against the run of play through Ryan Fraser after 71 minutes.

The Hammers equalised from the restart, as substitute Hernandez pounced.

Bournemouth are now unbeaten in five in the league, but boss Eddie Howe lamented the equaliser after a slow start from his side.

“We grew into the game and got better as it went on,” Howe said.

“We scored a great goal. And you’d hope, with the way we defended for the majority of the game that would be enough to win.

“We conceded straight after, so that’s the big disappointment.

“It’s a long ball and we just haven’t dealt with it very well. It was one of the only times in the game that happened.

“You could say it’s a concentration issue – I’m not sure. It’s just we haven’t attacked the ball well enough, twice, just outside our box.”