Home All The News Moyes sends transfer message to Palace, Chelsea and United 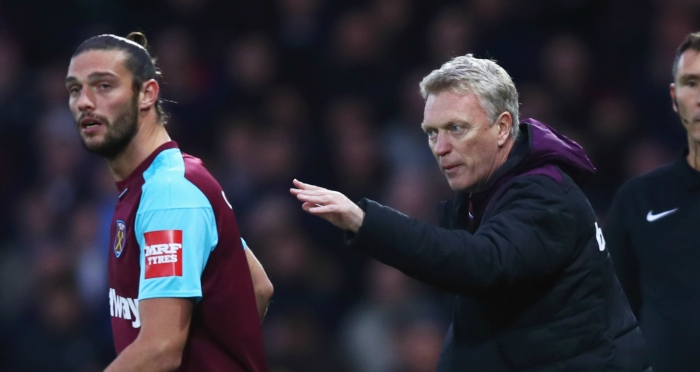 David Moyes insists he is in no hurry to sell any of his misfiring strikers.

Reports have claimed the West Ham boss is prepared to listen to offers for Javier Hernandez, Andy Carroll, Diafra Sakho and Andre Ayew this month.

The quartet have notched a paltry 11 Premier League goals between them so far this season.

Sakho, who tried to join French club Rennes in the summer only for a move to fall through, has been linked with a move to Crystal Palace.

But Moyes said: “I’m not aware of that at all.

“I know there has been talk of it, but Diafra is injured so I can’t give an update on it.

“There has been talks, everyone has been aware of that for quite a long time here, but we are more than happy to keep Diafra. We like him and there is no problem if he is still here.

“I don’t want any of them to go. We need to add to our squad. My intention is not to let anyone go.

“What I will say is we have four or five strikers and the competition is tough for all of them. But I’m happy with that. It would take an awful lot of money in this window to prise them out.”

Moyes has preferred playing wingers Michail Antonio and Marko Arnautovic in attack since he took over in November.

Mexico front man Hernandez has therefore cut a frustrated figure during his increasingly rare appearances in the starting line-up.

But West Ham would want to recoup a large chunk of the £16million they paid Bayer Leverkusen last summer were he to leave.

“I think the form of Marko and Michail has probably made it difficult,” added Moyes.

“When I joined – and I’ve only been here nine or 10 weeks – Javier was injured and we had to go with Marko and Michail up front and they have both done well.

“He’s a really good player, his finishing ability is as good as there is anywhere, he thrives on balls in the box and maybe in a lot of games we haven’t had that service to give him.

“But you’d be hard pushed to say that he would necessarily be playing in front of the other two at the moment.”