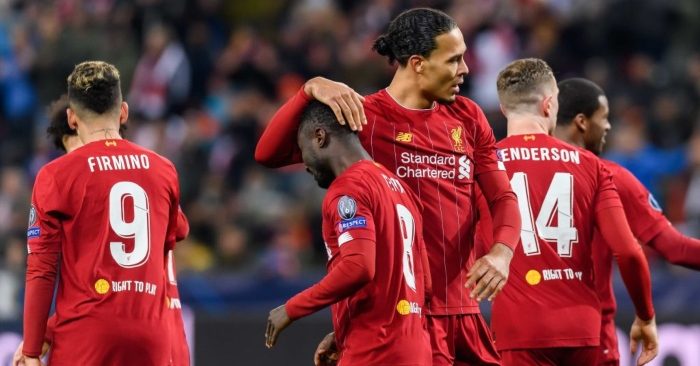 Thank you for the mails. Send more to theeditor@football365.com

This was the Naby Keita we waited for
It’s interesting that many Liverpool fans have stuck with and defended Keita since his transfer to Liverpool, in spite of the fact that his form on the whole has been underwhelming. Although he had a small patch last season of good form where he scored in the UCL quarter finals against Porto, a subsequent injury robbed him of a chance to continue his progress.

I know that the reason many stuck with him and I also stuck by him was that it was clear that he was a player simply lacking confidence and luck, but the talent was clear to see. There was always a deftness in touch, adventurous passing and clever movement and dribbling in midfield to get out of tight spaces.

Over the last couple of games though, we are finally seeing Keita play with authority. There is now a swagger coming into his play, that was first slightly visible when he came on from the bench at Old Trafford and helped set up Lallana’s equalizer, after which the Manyoo fans proceeded to celebrate that draw like a win. I know this is only based off of 3-4 games, but he looks like he is gaining more confidence with every passing good performance. He was excellent on the weekend against Bournemouth (sublime through ball for Salah’s goal), but today was a brilliant performance filled with creativity, assertiveness and intelligent. His crucial crucial goal is just reward for his efforts.

So well done Liverpool fans for supporting a player through a rough period with a large price tag and not resorting to writing him off or hating on him. I believe we may have started to see the payoff from that patience continue over the next few weeks.
johnnyWicky, Toronto

…Ahhh Naby Keita. You’re such a tiny sexy little man. I confess I did some YouTube scouting before he joined and I have been waiting to see some of what was featured on his highlights reels. My favourite thing about him was his habit of being where he needed to be. He’s definitely more forward focused than our other midfielders except for AOC and I think he’s got more goals to come. His close control is ludicrous.

Speaking of ludicrous; Mo Salah literally can’t score from 10 yards right in front of the goal but can slide one in from the corner flag, the mind boggles.

I felt like Firmino would’ve benefited from another rest today. He’s not been quite himself in the past few weeks and perhaps all the football he’s played in the past three years is catching up with him a bit. There are so many big games over this Christmas period and having him fit and firing will be essential.

A wonderful result overall, I think it’s fine to exit the Champions League in the knock out stages without too much embarrassment but dropping into the Europa is always a bit rubbish. This also is positive for our momentum in general and keeps the team feeling like they can beat anyone.
Minty, LFC

Well done, Naby. And vote Labour, FFS
Just lovely to see Naby Keita back in the side. He has a fantastic smile, and two MOTM performances too. Top of the group, top of the table, roll on Saturday.

Also, I’ve only seen two politicians speak in my entire life who didn’t seem like utter lying assholes. Bernard Sanders and Jeremy Corbyn. Please vote Labour. I have no health care. Most people I know don’t have health care. We just work and hope we don’t get sick, it’s bullshit. You don’t want this.

Up the Working Class, We are the majority.
Kenny, Stateside Red (Jez Tomorrow, Bernie 2020)

Why does Winty hate Chelsea?
Why is it that Sarah Winterburn has nothing positive to say about Chelsea?

Readers come to this site to read reasonably objective and well-written articles instead of the usual dross available on other sites. However, Ms Winterburn finds it impossible to hide her predisposed hate for Chelsea and therefore sh*ts all over what this site stands for. It is embarrassing. If you can’t set aside your personal biases then write articles about other teams instead of throwing your own insecurites into the faces of the readers.
Bird, Cape Town

…What did Chelsea do to Sarah Winterburn and do we need to beat them up??

She hates them so much!
Pandapool

Sexy, sexy Yohan
This morning I settled in to work with my usual routine:

Then (with a sharp in take of breath) I reached the ‘each club’s best buy of the decade’ article.

Nervously, I slowly began to scroll down to my beloved Newcastle United. With each slow roll of the mouse, I repeated over and over in my head “this better be the dreamboat! It must be Yohan!” and then boooooooom!…in all his glory I saw the Frenchman’s name and began to cry.

I hope I never forget how amazing he was for us, his goals against Everton and Man United were a delight, but not a patch on his lovely face. Mentioning his name among my friends sends at least three of them weak in the knees.

That said, my favourite Cabaye moment, was when Pardiola pulled him aside and told him to drill his free kick into the box against Chelsea for Goufrann (became a marked man in his second season) to nod home and send SJP into raptures. Better than any Scholes/Tree/Zidane story.

Cheers for that Ian Watson, you’ve made my day.
Ratt Mitchie – NUFC (We never did have that riot when he left)

Xhaka can’t
Excellent write up from Dave (Arsenal) Herts, spot on brother! Any Arsenal fan who thinks it’s acceptable to have Xhaka back in the team must be blind as his performances are rubbish even in a team that wins 1-3 and you can see he does not give a shit anymore (which makes him even more likely to keep brain-farting all over the pitch).

I believe it really damages the squad morale and supporter morale letting that player back in after what he did – wrong message Freddie, what he said and then what he said again – maybe we are playing him to up his value in the market before a sale but that ain’t working as everyone can see how crap he is!

BTW – leave Bellerin alone – his injury was really bad, nine months recovery and one of the things that happens post that injury is muscle strains as the player pushes themselves to get back to full muscle mass and full fitness – all those social media weirdo’s who say Bellerin is a waste of time – oh do me a favour – he is our most likable and when fully fit one of the best we have – leave the dude alone – he loves Arsenal!
JJT (another Joe who has renamed himself – every time Xhaka gets the ball wave those white and red hankies if you don’t like booing, it works in Spain 🙂

Minutes played?
I’ll have a go at DJ’s question about minutes played. I would imagine the main reason is that football is supposed to be a 90-minute game. The whole point of stoppage time is that it replaces minutes lost in the game, where football isn’t being played. During a 2 minute VAR check, your are not playing those 2 minutes, you play them at the end of the half, so you have still played 90 minutes. Obviously that creates confusion where subs come in but there’s not much you can do about that. Also, it provides a sense of equality, so that two players who have played every minute end up with the same number of total minutes, rather than letting added time interfere. So quite a boring reason, but that’s probably why.
Mike, LFC, London (Also, I know I used the < symbol instead of > in my mail yesterday, which given that I literally teach that in my job is very embarrassing but it’s near the end of term and I’m tired, so I’ll blame it on that.)

Spurs not like Inter…
I get being optimistic is one thing and Spurs with Mou can be a decent side that are bound to challenge for top four spots this season but comparing it to Mou’s treble winning Inter side might be a tad too much.

– Maicon was on of the best full backs in the world during those two years ripping it up for Brazil and Inter before Bale ended his career. Aurier has been probably one of the most defensively susceptible fullbacks from the big 6 teams, just see Rashford giving him a hard time from the last game

– Vertonghen is nothing more than a stop-gap at full-back. Don’t get me wrong, great CB but just doesn’t have the pace and attacking prowess a full back needs to. The sooner Spurs get someone else in that role the better. Plus he is on the wrong side of 30 and on the last year of his contract

– Sneijder was great, contrubuted defensively too. Alli does have the talent to emulate him so I will give to this one. That touch for his goal vs United was incredible.

– Zanetti and Cambiasso for Dier/Sissoko and Winks is laughable. Spurs’ biggest problem area is CM and none of these three have shown they can make the position their own. Cambiasso! I’m still laughing

– Milito was a peak Mourinho striker. Kane can definitely match him goal for goal but not sure if he has that nasty streak in him. Will still give this one to you.
Yash, MUFC

Jack in, Pogba out at United
So I have watched a few Villa games this year and Jack Grealish really has been the stand out player for them. McGinn & El Ghazi have also been promising, they have big futures ahead of them for sure. I know Villa aren’t doing too great in the league, but I think they have way too much of a technical and experienced team to get relegated. Players like , Heaton, Mings and El Mohammedy will drag them out of trouble when it really counts, but the manager may get the sack soon knowing today’s demands of managers.

Anyways back to my original point. As a United fan, I think Ole should be quite straight up with Paul and say we are planning to sell you in the summer. Don’t get me wrong, I love Pogba and we need a player like him who can play ‘Street like’ football. However, If he doesn’t want to play for the club (In which his agent has clearly stated), the club should be ruthless and slap a 100 Million price tag on him and hope that someone offers that amount. Even if we sold him for the amount we re-bought him for, just do it because his intention and passion to play for the club probably is not there. He isn’t worth more than that in today’s market and in all honesty Jack Grealish is a similar player to him and would cost 2-3 times cheaper.

Grealish still has a lot to learn, but hes skillful, works hard for the team and looks like a natural leader having been captain of Villa from such a young age. Stick him behind Martial, Rashford & James and it would be a VERY creative team with lots of pace.
Rami, London (Fred bossed KDB on Saturday, well done lad)