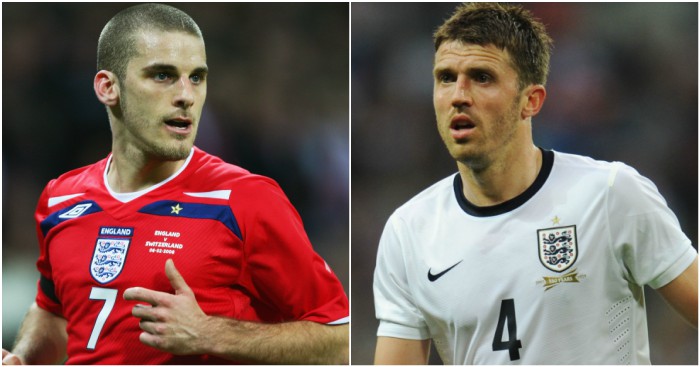 After Danny Drinkwater said thanks but no thanks, here are six more who turned down an England chance. Bloody treason…

Chris Sutton
“It was yet another mistake,” says Chris Sutton about his decision to reject Glenn Hoddle’s invitation to play for England’s B team. “I was picked for the game against Cameroon, and I was really delighted to get on and get my first taste of international football. Then in the next couple of months before the Chile game I did alright. My form was good, and I think there were injuries.

“I thought I’d definitely be in the squad again. I thought I might start to be honest, and then Glenn Hoddle put me in the B squad. It wasn’t right what I did, and Glenn Hoddle was quite right to put me away. I phoned him up and said I wasn’t going to play for the B team, and he said I’d never play for England again. And you have to say he was right!”

David Bentley
The prioritisation of club our country is a long-running argument, but nobody has made as emphatic a statement as David Bentley. Or the “new David Beckham”, as Steve McClaren helpfully labelled him.

In May 2007, Bentley was Man of the Match for England’s B team against Albania and was promptly named in the senior squad for two games the following month, although didn’t come off the bench in the friendly and missed out on the matchday squad for the qualifier against Estonia. Later in June, Stuart Pearce called up Bentley for the Under-21 European Championships, but he refused the place.

“I think it is for the betterment of my career,” said Bentley. “I owe a lot to the Blackburn fans too and they are paying the money to watch me week-in and week-out. I had three decisions; the club could have pulled me out, I could have pulled myself out or I could have faked an injury. I am an honest lad, I’m not a robot and I wanted to give my decision and my opinion on it.”

Micah Richards
We all got into the spirit of London 2012, but none more so than Richards. He turned down playing for England for it.

Roy Hodgson wanted to put the then-Manchester City defender on his standby list for Euro 2012, and he would have made the squad given that Martin Kelly was eventually called up to replace Gary Cahill. Yet Richards decided that he would rather play in the Olympics.

“Once I wasn’t picked in the squad this chance with GB came around and I wanted to go to the Games,” Richards said. “It is always an honour to represent your country. It’s not just England, it’s GB, so it is something new.” Bad shout?

Ben Foster
It wasn’t just that Foster decided to an indefinite break from international football (although stressed that this was not a retirement), but that England manager Fabio Capello only found out the news when it appeared as a statement on Birmingham City’s website.

Worse was that Foster had actually spoken to general manager Franco Baldini the week before and failed to give any indication that the decision was forthcoming. It made England’s management look silly and meant that Joe Hart no longer had meaningful competition for his place.

Two years later, Foster announced that he was up for playing for England again, and 16 months on was appearing in a World Cup for his country. Lucky boy.

Michael Carrick
“I hadn’t played for so long. It’s not so much that you fall out of love, it’s just that it isn’t there any more. When you are taken away from it you realise how special it is and what it means to be there.”

That was Michael Carrick’s emotional statement about refusing to be called up by Roy Hodgson for Euro 2012 after failing to play a competitive minute for England between October 2009 and the even of that tournament.

The decision was particularly odd given that, two months later, Carrick decided that he did want to play international football and promptly started four of England’s next five games. Were those two months spent picking up toys and putting them back into the pram?

Tom Ince
Another player to turn down a place at the Under-21 European Championship, Ince later explained that his was an entirely selfless act.

“People don’t realise that I was the oldest player in that squad by a good 18 months,” he told the League Paper in 2015. “I played in the qualifying games because I wanted to help. But I’d experienced the European Championships once and I just felt that we had a new young crop of players coming through who deserved the opportunity more than me.”

“I wouldn’t ever refuse to play for England just because I didn’t fancy it. And I’d never feign injury or anything like that. I love playing for my country and I’ve got ambitions to do it again.”